Miss Independent Vs Miss Submissive: Can women really be both? 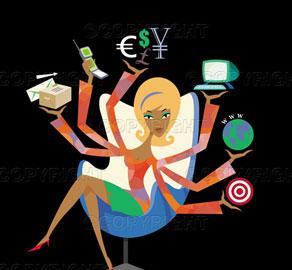 Okay I am confused! Neyo says he wants miss independent, someone who walks like a boss and talks like a boss, car and her crib paid for and all of that. Every guy I meet seems to echo the same sentiments, “we want a woman who doesn’t depend on us for everything”. And truth be told, most women seem to have heard that message loud and clear with more women in the business world than ever before. In fact recent statistics from the US Labour union shows that 49.83% of all US jobs are held by women and that 51% of all workers in high paying professional and management jobs are women!

Okay, so what’s wrong with this picture? Well, I recently met up for drinks with an old male friend. He has been in and out of relationships for the past 2years and I could sense he was getting a bit frustrated with the woman folk. So I asked him, Bayo, what really is the problem? Why can’t you stay in a relationship longer than it takes paint to dry?  His answer annoyed me. “Glory, my last girlfriend’s wahala was too much.  She was too stubborn, she wasn’t submissive enough. I want a submissive wife”. Bayo and I go way back, so I decided not to give him the tongue lashing he deserved. I just smiled and said “may God provide you with a door mat!” and continued sipping on my drink.

But my anger was further fuelled by this month’s issue of Essence Magazine. In an article posted by the magazines relationship columnist, the writer seemed to suggest that independent women are preventing men from being men in relationships. I wanted to scream! Why can’t men make up their minds, if you are a real man, then show your woman what you are made off instead of throwing hissy fits trying to shove your man hood down her throat.  (Okay rant over!)

After I had calmed down, I started thinking, is it really possible to be independent and submissive at the same time? Is there some invisible shade of grey between submissiveness and independence that we women most cross in order to become the perfect woman? The truth is I don’t know the answers to these questions. What I do know is that the world is sending us conflicting messages. It’s like we are expected to be business moguls, tearing down the barriers of the business world. Then like Cinderella, when the clock strikes five, our 400 pounds stilettos are meant to turn into aprons and our briefcases into  cooking spoons! How are we supposed to balance these seemingly polar personalities? How is it that after I have had the same job shift as my husband I am meant to come home to the cooking and cleaning and he comes home to the sofa and latest Manchester United scores?

This article seems to have raised more questions than answers. And if I am honest with you, I really do believe that a woman is meant to be submissive and should also be allowed to make her mark in the business world, if she so desires. But I also firmly believe that it takes 2 to tango. And every perfect dance requires a leading man, providing a steady hand at the small of the woman’s back and a steady footing for her to follow. What do you think?