Once a Cheat, Always a Cheat 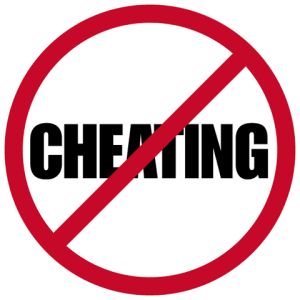 It’s become a normal scenario. You date a guy, he tells you he loves you, you tell him the same and somewhere in your mind you expect to live happily ever after…WRONG!!!!!

Somehow the idea of fidelity or monogamy has become old fashioned. Like a dead dog kicked to the curb, being faithful has become distasteful in today’s society. And heaven help you if you are married or dating a Tiger Woods wannabe, you’ll have barmaids, baby mama’s and all manner of women folk crawling out from under the wood works!

But you’d be wrong to think cheating was a privilege reserved for only the male folk. On the contrary, women have also entered this new amoral club, and have taken all its privileges to heart. Recently, I went to visit a friend of a friend only to witness what I can only describe as an all male, female bashing session. Apparently, one of the guys who had been engaged to marry sometime in the new-year, had been ditched by his girlfriend for an albeit older but richer model. The abuse was endless, “what a wh**e”, “Bit*h”, “after all you did for her”, “you are better off with out her”. Since I was the only woman present, I sat in silence while the abuse continued. But I couldn’t help wondering if the guy in question had been an entirely innocent party. As if reading my thoughts, one of the guys replied, “abi is it because of what happened between you and Rotimi”. “And so”? Another replied, amazed at his friends suggestion “A woman is not meant to cheat”. For some reason I cannot quite explain, a cynical almost wicked smile appeared on my face. Yes, shoot me, but I was happy. For a long time men have taken women for a ride, cheating like their lives depended on it, now its payback time and they are whining like school girls. At that moment, I wished I knew the girl in question. I wanted to say thank you for getting yours back. And if by chance you happen to read this…good on you babe!!!!

But then when I got home, common sense returned. I began to wonder if two wrongs really do make a right, even if it’s just a little right. I wondered what sort of families the world would have if mummy and daddy were both having affairs with house help and driver. The thought is actually cringe worthy and quite repulsive. So my question is this, if we all can’t be monogamous, why commit? Really, is there a point? If you can’t keep to one partner why stand before God, family and friends and promise to do so? It puzzles me that in this time of AIDS and other STDs people choose to change partners like they are in some sort of Olympic relay team. Maybe I am old fashioned, but I believe it’s a free world. If you want the freedom to choose between Kemi, Rose, Charity, Peace or David every day of the week then so be it. But if you want the responsibility that comes with marriage and commitment, then for goodness sake stick to it! (Okay, rant over). But seriously people, the world is full of drama, terrorists plots, recession, petrol scarcity, inflation….the last thing one needs to be worrying about is a cheating partner!

The Countdown to Face of Africa Begins!