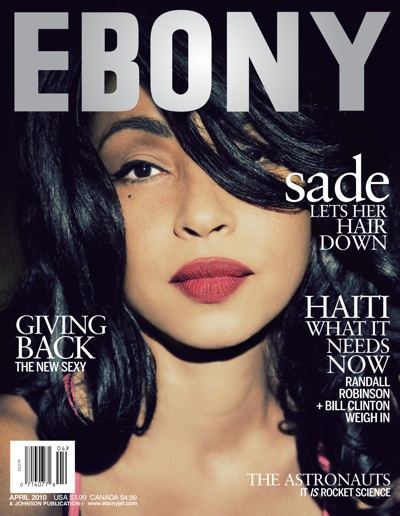 British-Nigerian musician Sade (Folashade Adu) is on the cover of the April edition of EBONY Magazine. Sade looks gorgeous as always and in the interview, she talks about her family and new album. Sade’s latest album, ‘Soldier of Love’ hit the top of the charts and broke records when the album sold over 501,000 copies in its first week of release and has already been certified gold. The album has also enjoyed overwhelmingly positive reviews from the press.

Entertainment Weekly featured SOLDIER OF LOVE in their “Must List” and gave the album an “A”, Rolling Stone wrote, “it’s unimpeachably excellent,” and The Boston Globe calls it, “a rich and rewarding album.” But the accolades don’t stop there. Associated Press raved, “like a long-ago lover not quite forgotten, Sade has returned to steal our hearts with more beautiful, uncategorizable music,” Billboard was quoted as saying, “it’s been 10 years since Sade released an album, but be forewarned – the giant has awoken,” while People Magazine reminds us that “Sade remains the voice of comfort to the wounded heart.”

In case you missed it, Video: Sade – Soldier of Love

Behind the Scenes Video – Making the Album

Making Of The Album

Experience The Ultimate Face-off: V-Monologues vs. Tarzan Monologues on stage in March