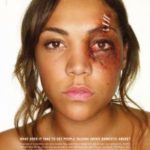 A friend once told me I had become famous for my woes. My brothers had started teasing me. They said “Wana, can’t you find something else to write and talk about…Are you not tired of milking your very unfortunate childhood?” At this point I made a conscious decision to stop talking about domestic violence. Maybe it was time I stopped airing my dirty family laundry in public.

Then just a regular day at work, we received a text message. The message was from a listener who said she was pregnant still in her first trimester and her husband had just beaten her with a cable wire.

As we read out the text on air, my insides started to fill up with hot air – I was furious! Then we called her and she narrated the story to us live on the radio. As she spoke my head became a slideshow of familiar images. I tried so hard bottling up my pent-up frustration. But somehow it succeeded in getting the better of me. My boss watched as the tears fell in ferocious trickles down my face. Then he put the story forward to our listeners soliciting their contribution he added “Wana even shed a little tear there” in his jokey American accent. The woman became our radio moment case study for over a week. Numerous calls and text messages came through. With everyone having their own unique brand of counseling and therapy. We were inundated with advice from those who were friends of friends and of more friends of victims of domestic violence.

Amongst the responses received were

“Divorce is not an option, the bible is not in support of that. she needs to seek the counsel of the Lord and remember that this is a marriage. It is for better for worse”

At this point I wanted to tell these illiterate morons that till death truly do them path right, and we will all buy expensive lilies for her grave stone right? Of course the epitaph on her gravestone would read

“our dearly beloved sister, dedicated wife and mother who sat there while her beloved husband opened up cans of “WHOOP ASS” on her while she was pregnant. She was so dedicated to her vows she stayed till her ass was whooped to death. She will always remain an inspiration to all. Her suffering in silence was always commendable. Her patience, next to none and her commitment to culture was always admirable”

I eventually had to keep reiterating whilst struggling to appeal to my conservative listeners that this wasn’t about what she had or hadn’t done. It was about the fact that you don’t beat your animals with cable wires let alone a woman you marry and call the mother of your children. It was bad enough I had already been reprimanded at the office general meeting for being too “girl power” on the radio. So it was very important to not condemn or have an opinion on the subject.

The weird part was that most of these comments were made by women. But I had seen it before. My mother had been beaten for over ten years actually. We had prayed, burned celestial candles, been to the prayer retreats, anointed by prophets and exorcised from the demons of great grand parents past – and it didn’t change a thing!

No one ever said pack your things and come stay in my spare room. We stayed there and prayed while we incurred medical bills from our lives of domestic abuse. Still we were lucky because for some others they paid for caskets instead.

After that week on the radio, I realized domestic abuse in my childhood home will always haunt me because it wasn’t just about me. There were women in Louboutin shoes and Marc Jacob bags who covered their punch bag faces with MAC foundation used alpha-hydroxy acid to rid their skins of scar tissue.

The worst crimes against humanity are those that happen in your own homes. You know why, because home is the place every human being should feel most safe. I read once on an Adidas poster, “to be silent is to be a part of the problem”. I realise I might for the rest of my life embarrass my brothers because I will always talk and write about domestic abuse. So let me be known for my woes. The day that you shut me up is the day that I die.

If you are a victim of domestic abuse, please seek help. You can visit www.projectalertnig.org to get resources that can help guide you and protect you from your current situation

The Gold Digger in Me

Dance your way to fame! Malta Guinness ‘Street Dance Africa’ back in a new exciting format