A Future Beyond the Dingy Room 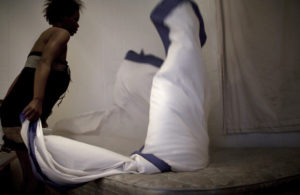 A few weeks ago, I picked up the Saturday edition of Punch which I spotted laying around my house. Weekend editions of Nigerian newspapers are almost always a very entertaining read. They have all sorts of articles from entertainment news to investigative reports. I usually read it, shake my head as I read about the political mayhem, laugh out loud at the other incredulous stories and then forget all about it.

However, there was something about this paper that struck a chord, there was an article titled “I slept with an average of 7 men a day”. I was taken aback by the headline. I read the article and it was both heartbreaking and infuriating. The subject of the article was a teenager named Agatha, who was lured away from her village in Enugu by a family friend who promised her a job as salesgirl in Ibadan. She ran away from home despite pleas from her grandmother. As soon as she landed in Ibadan, she was handed over to her new ‘owner’. I say owner because she was sold. She was taken to a dingy hotel, starved for 3 days and despite her pleas, she was threatened with violence. After that point, her life as a sex slave began. Being abused by various men everyday with her ‘pay’ being pocketed by her ‘owner’, ironically named Madam Best. Agatha was very lucky, a would-be customer helped her escape and a kind stranger ensured that she was not recaptured by her madame and her crew.

Many of us live our lives blissfully unaware of ‘Agathas’ all around Nigeria. We hear many stories of Nigerian girls prostituting in Italy, when you are driving at night, you see women dressed in the skimpiest outfits waiting for their next customer, if you go to the clubs, you see women ‘winding’ in acrobatic ways and going home with patrons. At this point, we are almost nonchalant about it. Sometimes, we hiss and say things like “Ashewo” under our breath or maybe we say a silent prayer for them. While very few of these women make the choice to enter this profession, there is a huge percentage of young girls (Many as young as 11) who have been pushed and coerced into this seedy world and from where they are standing, there is no escape. In my western influenced mind, where I have been raised to believe that, we all have a CHOICE. I always wondered, why don’t these girls just leave. Why do they keep doing this? Well, I found out that leaving is not an option in most cases. These girls are alienated from their families and are threatened with violence and even “spiritual consequences” such as death and madness (many of the girls are made to swear various oaths) if they try to leave.

So this is it. That is their life. A painfully numb existence. An unending cycle of having sex with men to survive.

Thank God that some people are trying to help these girls reclaim their lives. The Freedom Foundation setup the Genesis House, a safe home for young female victims of sex trafficking and exploitation. I along with a group of friends visited the Genesis House a few weeks ago. We toured the facilities and spoke to the administrators. It’s a simple house tasked with a complex challenge – To help these girls who have been battered and abused to rebuild their confidence, lives and future. The girls go through a 6 to 9 month programme. They receive counseling, reorientation and job/skills training.

Indeed, they have their whole lives ahead of them. The youngest girl in the house is just 13 years old…

I went back to the Genesis House to speak to the girls a few days later and that experience was a revelation. I met Cynthia* – Cynthia is a pretty and bubbly girl. She’s been in Genesis House for only a few weeks. As with many girls, she ran away from home to Lagos. She had dropped out of school after her JSS3 exams, her mother had died and father said he couldn’t foot the bills for her transportation anymore – it cost 200Naira a day – less than $2. A friend encouraged her to move to Lagos, that she would work with her in a beer parlour. She sent her money for her bus fare. When she arrived in Lagos, she discovered her friend was living in a hotel – working as a prostitute. At this point, Cynthia who was still in her teens, had no money to go back home. She started what she refers to as “the job”.

She took me into her world. She explained that the registration fee for each girl in the hotel in 5000 naira. Every month, they were charged 2000naira for Police dues, 150 naira for the DJ and 900naira daily as their dues. Shockingly, the owner of the hotel has a ‘conglomerate’ of 7 such hotels in Lagos. When we calculated the owner makes several millions per year from these girls. He even lives in one of the hotels with his 3 wives and children. Each day, different types of men would come into their tiny rooms with all sorts of requests. She charged 500 to 1500 naira for ‘short time’. For years, Cynthia did this. She told me “I didn’t even think about any future….what future?” Cynthia didn’t dare to think of leaving. When the Freedom Foundation visited her hotel, she was very reluctant to leave. She sought the advice of a mentor, a woman who had been a prostitute for over twenty years. Cynthia said – The woman advised me not to leave, she told me to keep working as a prostitute and “save money to start my own business”. It’s so funny that in her 20 years of being a prostitute, the woman giving the  rotten advice has not saved any money to start her own business.

One of the reasons that Cynthia was so reluctant to leave was because she owed her pimp 7000 naira. An amount that many of us spend of recharge cards each week, that is what was tying her to that life. Eventually, the Freedom Foundation paid her debt and Cynthia entered the Genesis House. It has not been an easy adjustment but now she is firmly committed to turn her life around. I ask her what her plans are for the future. She excitedly tells me that she wants to be a hairdresser and own her own salon. I ask her if she sees herself going back, she emphatically says “NEVER”.

It’s a blessing that Cynthia and girls like her have a chance to live positive and happy lives. Graduates of the Genesis House have gone on to success including one with a successful farm. Another girl that I spoke to has been offered a job at an events decoration company; she also plans to enroll in university part-time. Younger graduates of Genesis House go to back to full-time education – a young 14 year old graduate of Genesis House is currently in a boarding secondary school. A total 360 degree change from her previous life.
I strongly believe that there is joy in sharing with others. Doesn’t have to be money but your time is also valuable. The girls of the Genesis House need positive mentors and many are eager to learn a skill. Perhaps you can open up your business to apprenticeship opportunities or donate some items.

It’s so sad that a common element in most of these stories is WOMEN. Fellow women recruiting their “sisters” into these dangerous situations. You can make a difference by advocating and educating women around you. Also there is no prostitution without customers; I believe that any man who respects himself should not have to pay for sex. You can do something by raising awareness on these issues and promoting stricter penalties for solicitation.