Beauty Behind The Veil: The Mohammed Lawal Story 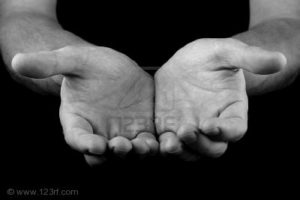 About 2 years ago, I wrote an article about Mohammed Lawal, which was published on Nigeria Village Square.

I described him in that article, but I didn’t share the full story of my experience with him. I saw Mohammed again yesterday, and felt inspired to share everything with you here.

Mohammed Lawal stands on the curb of the service lane around the Town Planning junction of Ikorodu Road, and sometimes at the busy Maryland intersection, here in Lagos.

You might know him; he is an albino with a terrible skin condition. He squints at the road users as they pass by, using his towel or his hand as a shield to protect himself from the penetrating rays of sunlight which most likely,  is responsible for his condition in the first place.

Mohammed has pus oozing out of the breakages on his face, some hard and dried up after hours of building up. His eyes are watery pools of yellow liquid and his skin is red from the harshness of the sun’s effect on it.

With his hands held out, he shuffles toward the cars waiting at the intersection for the traffic light to turn green. And what a wait it is, where three minutes becomes like thirty to the driver and passengers of the vehicles, as they dread the moment when Mohammed will get to their own car.

By the force of my will, I command the traffic lights to change quickly because in all sincerity, Mohammed Lawal is definitely not a pretty sight to behold, or worse still to have hovering over your vehicle window.

Day after day, road users taking that route have to steel themselves for the short period that they will be confronted by Mohammed as he begs for alms.

As an observer of Mohammed’s routine, and people’s reactions to him, I have come to the conclusion that the hands he stretches out in front of passers-by to receive alms, is indicative of his primary desire; to receive acceptance from the world around him.

The need for acceptance is a legitimate need that we are all born with; our entire socialisation process is simply a machinery to serve the communal need of a people who need to be accepted.

Satisfying that need is harder for some than others; rejection, especially in childhood, creates a deep void which will take an almost impossible level of acceptance to fill.

This spurs us to search for newer and most times illegitimate means to satisfy this need.

For someone like Mohammed Lawal, who has such a condition that makes him repulsive to even the most tender-hearted of individuals, finding acceptance from people has most likely been his lifelong quest; the irony is that like a lot of us, he may not even know it.

That is one of the harshest tricks that life plays on us. The truth of our situation is often within us, but we are conditioned to believe that the answer to the question we don’t even know is somewhere out there, so we embark on a search in futility.

Rejection, in Mohammed Lawal’s experience, is possibly as normal to him as the sensation of pus dripping down his face.

It is the story of his life.

Daily he comes out reaching out again to a world that rejected him yesterday. With hands outstretched, he resembles an apparition from a bad horror movie, seeking acceptance from people who shrink back in fear and disgust as he approaches them.

Nonetheless, Mohammed is there the next day, and the day after, hoping that one day someone reaches out and takes his hand, validating him as a fellow human being sharing in the suffering that we all experience.

However, unlike you and I who may have either built a wall of defence around ourselves to protect us from the world’s rejection, or betrayed our own selves just to find acceptance, Mohammed comes out everyday just as he is; repulsive as even he knows he looks, and stretches out his hand.

For that reason, Mohammed Lawal is my hero.

People ask me all the time from where I get the ‘strength’ to allow myself be so vulnerable in my writing. I laugh; if only they know the way I shiver in fear when I’m writing about my weaknesses, my experiences, my pain, my shame, and every other thing that makes me a candidate for Mass Rejection.

God gives me the Strength.

His total acceptance of me in spite of me, gives me confidence that no level of affirmation or acceptance from people can contend with.

In Mohammed Lawal, I recognised a Brother; a Comrade; a potential Friend.

So I decided that I was going to be that person who would hold his hand. And I did.

I walked up to Mohammed, my heart pounding in the fear that up-close, I would see his face in its full repulsive state, or be infected by the pus from his face, which he touches, when holding his hand.

Every heart-pound of fear inspired my next footstep and soon, I stood right in front of my Hero.

I reached out and I held his hand. I squeezed his hand…it was soft.

I looked into his eyes, and he lifted them and looked right back at me. Then Mohammed smiled at me.

In that precise moment, I saw HIM. I saw his beauty; I saw the person the veil covered; I saw the child of God his skin condition and a lifetime of Rejection had masked.

Mohammed Lawal is a beautiful sight to behold.

We talked…I introduced myself. He told me his name and thanked me for the lunch I had brought him. I thanked him for something he may never understand.

I will visit Mohammed again soon. I hope he remembers me. I know I can never forget him.

He is my Hero.

If I Tell You Once, I’ll Nag You Twice