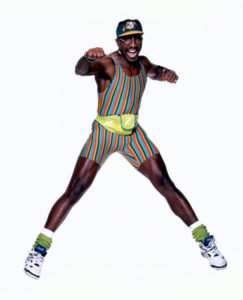 They say the first step to confronting something is acknowledging it so in that case – I am the Renaissance man and I am facing a mini pot belly crisis.

The once incomprehensible idea which I smirked with disgust whenever I saw a Senegalese wearing ‘Alhaji’ rocking his pretty-paunch-swag has also cornered me. After months of denial, I have accepted and decided to do something about what can only be described as the worst confirmation that slim fit shirts are no longer a good look for me.

I’ve tried a number of things from eating less to replacing 9 oz. sirloin steak with watermelons to outright starvation but perhaps if I actually stuck one of these out for more than 2 days then I’d have a higher success rate.

Last week, I hired a trainer (….don’t get ahead of yourself…) this isn’t Kimora Lee-Simmons style trainer with the trendy trainers and Oakley sunglasses; my trainer opts for slippers ton k’alleluya soke and a stern look. Instead of a state-of-the-art gymnasium, we use my terrazzo-floor parlour and decorative vases as dumbells. If truth be told, the idea of hiring a trainer is greater in thought than in practice.

I’ve had to quickly keep my chap in check with instructions of no pre-session phone calls. I mean, who wants a human alarm clock breathing down the phone with frightening levels of enthusiasm?….I’m like ‘dude it’s o’clock, let’s not OD on the positivity’.

My first ‘workout’ session was as painful as watching Roger Federer’s forgettable set at the US Open semi-finals. Sleep deprived, I couldn’t be bothered to put on proper sport gear so I ended up doing jumping jacks in my jalabia with bare feet. Prior to that, I’d spent 10 minutes exercising my CD collection trying to decide whether Rick Ross’ B.M.F was ideal workout music.

Anyway, after an exasperating 45minutes of looking ridiculous in front of family (who tried their best to keep a straight face as they watch me manage 2 sit-ups), the first session was over and I was feeling rather fresh. I downed a couple cans of B-Star energy drink (the best energy drinks in Lagos by far) followed by an energised yoruba rendition of ‘…. I Got a Feeling…’ in the shower.

I’m sure you can understand my excitement, after all, this is the same boy who managed to talk his way out of PE for most of his high school years, often exercising his lungs with cigarettes instead with the cool kids and laughing at other kids who were supposedly ‘uncool’ for chasing a hockey puck or cricket ball around.

And so the inactivity continued, until I realised I could hardly walk 2 flights of stairs without a sigh or heavy breathing as if I’d just been harassed by GMTV’s Mr Motivator.

Later that night, I was eager to hit the club to celebrate. After all, it isn’t everyday a novice manages to do 45 press-ups – is that a round of applause I hear?

This excitement was short-lived, the next morning I woke up to a shocking revelation that I couldn’t get out of bed. I couldn’t physically move my lower body. After several attempts, I just gave up and laid there before screaming out loud. I naturally picked up the phone to call the trainer; the conversation went a little something like “o ti daran o”! (You’re in trouble)

He felt the only way of calming me down was to laugh hysterically on the other end. That just infuriated me even more. All I could think was OH.HELL.NO!

That muscle Mary better be thanking his lucky stars that he was on the other end of the phone otherwise, both him and his biceps will get the Oshodi Bus stop treatment.

I couldn’t stand up straight for the rest of the weekend – laughing was as uncomfortable as watching a woman relieve her weave itch with your Mont Blanc pen.

So I beg my people, when next you see me – feel free to point to the obvious. Just remember that you are the same persons who once told a boy that he was too skinny and he needed some meat, now that I let myself go, you’re the same ones who spot my pot belly from the entrance of Marquee from your outdoor table.

Food will punish you all!

This week’s Friday Track is Giggs with his heavy heavy British grime smash, Hustle On.

How to Really Lose a Guy in Ten Days