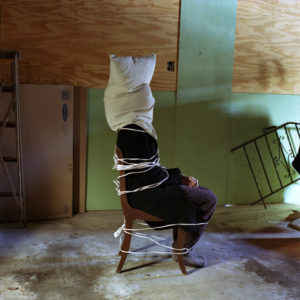 Yeshidi, was annoyed. In fact, he had stopped being annoyed over an hour ago. He was now officially pissed off. He’d been waiting for these clowns for over three hours and they still hadn’t turned up, plus he was running out of cigarettes. He always worked alone, but there was too much riding on this. His mind drifted to the possibility that they had been caught and for some reason, he could hear the faint sound of sirens. But he smiled, his plan was fool proof, perfectly constructed. Only complete imbeciles could mess this one up. And although Douglas and his boys were no Nobel Prize winners, they had pulled some good stunts in the past. No, it had to be the mark that was wasting time. Yeshidi took the last drag from his cigarette and resumed his position at the rear end of the gun barrel. He had only have one chance and he wasn’t going to miss it.

Mary was tired. Being the Governor’s wife wasn’t at all what she thought it would be. She expected long summer vacations in Europe and quarterly shopping trips to Dubai and Italy, fuelled by a never-ending stream of contracts from various state parastatals. Instead, she was expected to go from one place to the other supporting various initiatives and talking to housewives and market women. She found it all very tiresome and boring. Afterall, what did she have in common with tomato sellers and women who had spent all their life indoors washing their husbands’ cloths? This was not the life she had painstakingly planned. Today, for example, she had been up since 3am and had been to every committee meeting she could think of. At one point, she wasn’t sure if she was talking to the Soldiers’ Wives Club or the St. Theresa’s Children’s Charity. It was all a jumble and all she wanted to do was sleep. She wanted to get home, take off her stodgy clothes, wash off all her make up, climb into bed completely naked and catch up on The Bold and Beautiful. She wondered what the twist in the Rodrigo story would be this week. She couldn’t wait. “Madam, the Governor is on the phone”, Bunmi said completely breaking into her thoughts.  What the hell does he want?, she thought. The bastard hadn’t bothered to come home in two weeks. He had missed Ngozi, their daughter’s birthday party and hadn’t even bothered to call her to explain. The papers were rife with gossip about him replacing her with one of his mistresses next year when he was expected to run for president. But Mary had told him she would rather die than see all her hard-earned work go down the drain for some university drop-out. So he’d have to kill her first before he divorced her and he told her that could easily be arranged. Marrying for money had its perks, but her husband, the governor, and potential Presidential aspirant was a complete and utter waste of time. She hated him; he was ugly, fat and performed horribly in bed. But what she hated most about him was how miserly he was. Everyone knew you’d need a chisel to get ten naira out of his tightly clenched fists! “Hello” she said, as she grabbed the phone out of Bunmi’s hands. “I hope this is going to be brief”. “Yes it will”, replied the voice at the other end of the phone. “We have your son and if you want to see him alive again, you need to bring 10 million dollars to a secret location. I will call you back in exactly 3 and a half hours, with information on the drop off point. If you call the police or play games, I’ll send your son’s head to you in a plastic bag”. And then the line went dead.

Douglas couldn’t stand Yeshidi. He acted like some kind of Messiah to the underworld and had the biggest chip on his shoulder. But hate all he could, Douglas knew that this particular plan of Yeshidi’s had the perfect combination of sheer genius and major payout. He could almost smell the money. Douglas and his boys had never worked with Yeshidi. But he had heard enough stories to make him more than aware of Yeshidi’s style. He was a cut throat killer. Word on the street was he had killed his own dad, at the age of 13, after he caught him having sex with his younger sister. He also later killed his mother, when he found out she had been aware of it for over two years and had done nothing to stop him. Douglas had killed many people too and, given half the chance, would have killed his father if God hadn’t beaten him to it first. But he loved his mother, and the thought of any man killing his own mother, told Douglas that this man had no loyalties. But when Yeshidi came to him three months ago with his proposition, he just couldn’t refuse. But he also knew that he would breathe his last breath, if he failed. “Banjo, can’t this car go any faster?”  “Oga D, I bin tell you last week say the car needed servicing, but u no gree! Ehen, na im be dis na!”.  Douglas contemplated slapping the corner of Banjo’s head as he normally did any time he gave a stupid answer, but decided against it. He had bigger fish to fry; he’d save the head slap for another time. They’d been tailing the mark for over three hours now and Douglas was running out of patience. He contemplated calling Yeshidi, but decided against it. He had nothing to report; so far, everything had gone according to plan, the mark had done everything as expected.

Bayo wasn’t sure where he was. He wasn’t sure if the room was dark or if his eyes were actually closed and for some reason he couldn’t move his hands. He decided not to panic; it was probably a bad dream and He would soon be awake. He stayed perfectly still for what seemed like a few minutes and tried blinking his eyes, but nothing happened. If he wasn’t dreaming then, where exactly was he? The last thing he remembered was following Chioma back to her place after his friend’s party. Chioma was his girlfriend Nneka’s older sister and she’d been keeping him occupied while Nneka was in the hospital having her appendix removed. He remembered pushing Chioma to the wall and buring his head in-between her large breasts while she skilfully undid his trousers. He was about to lift her chunky thigh unto his shoulder when suddenly he felt a sharp pain on the left side of his head. Instinctively Bayo tried to touch the soreness he felt at the back of his head, but, again, found he couldn’t move his hands. He suddenly began to panic. Where was he? What was going on? He tried to scream Chioma’s name and, for the first time, realised that he couldn’t actually part his lips. Fear seeped into his gut and his stomach tightened. He started to shake and tried to free himself of the mysteriously bound situation he found himself when suddenly he heard a voice.

“Stop moving”. He paused for a second hoping to hear Chioma’s voice explaining that this was some foul prank she and her sister had played to get back at him for two-timing them, but the voice made no more sound. He shook himself again, this time the chair he was sitting on toppled over, throwing him on the ground.

“I told you to stop moving”, the voice said again. This time the voice sounded closer and he felt himself being lifted up from the ground. Bayo shook himself from side to side hoping to get the voice to say more words that would somehow confirm his safety, even though he knew his present predicament indicated otherwise. This time, the voice spoke directly into his ear. In fact, the voice was so close, Bayo could feel the saliva from the speaker’s mouth sprinkling onto his ear lobe. The voice was not loud, but the speaker’s words were clear and firm.

“If you ever want to see daylight again, you better stop moving”. Bayo froze as tears trickled from his tightly bound eyes.

Mary clutched the phone tightly even though she knew the person on the other line had hung up minutes ago. Her eyes searched round the car for nothing in particular. Her eyes finally drifted to her watch -it was exactly 3:15pm. In exactly 45minutes, The Bold and the Beautiful would begin. She didn’t have much time left, she had to act fast.

“Oh My God!”, Mary finally screamed. “My son, my son Bayo has been kidnapped”, she said, looking frantically in Bunmi’s direction as tears streamed down her face. The driver of the car immediately slammed on the brakes as Mrs Mary Morenike Abe, the First Lady of Lagos State screamed at the back of the car. The aides in the cars behind immediately rushed over to see why the driver had stopped. “It’s Bayo”, Bunmi said as she cradled the crying First Lady in her arms. “The Governor’s son has been kidnapped!”

“I’ve made ‘money’ through online ventures, but not as much as I’d love to make.” – Loy Okezie, Tech Blogger & Startups Analyst