Whether Na One Naira!…Yeah Right! 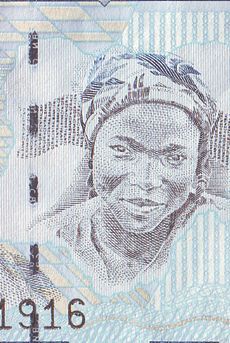 Undoubtedly, the track “One Naira” off Nigerian rap sensation, MI’s sophomore album MI2 is easily a fan favourite. Coming off a much anticipated, yet not-quite-up-to-par with his hit debut album. The track dwells on the idyllic topic of romance with or without finance. Well, as nice and as well-meaning as it may sound, One Naira tries to sell us a lie – the lie that love (the true one as well as the fake one) does not require money.

Like any Nigerian who listened to music in the 80s, African American songstress Gwen Guthrie said it all in her 1986 hit, Ain’t Nothin’ Goin’ on But the Rent: men have to have a J-O-B if they want to be with her or any woman for that matter. Money, excuse me, plenty money is certainly a sine qua non in matters of the heart for without it, like erstwhile rapper Freestyle said in his track Money, “Woman cannot gel!” Allow me to illustrate.

At the university, my friend Ayo met a very lovely and pretty girl, let’s call her Shade. Ayo and Shade became good friends and he carried a torch for her. At the time however, Shade was in a relationship that lasted all through university, so Ayo bid his time and waited for his chance. His chance came at graduation when Shade broke up with her boyfriend. He said that it was as if heaven had smiled down upon him; finally Shade was his. They served in different states and they tried to see each other as often as possible. They would take long walks, hold hands and declare their love for each other. They talked about their plans for the future as he said he had every intention of spending the rest of his life with her. She said she felt the same way, and things could not have been better. They declared their love for each other saying all the sweet nothings – truths and lies – that accompany such tender moments. And of course she said what I am sure most women have said at one time or the other: “I love you and I want to spend the rest of my life with you. It doesn’t matter even if we don’t have any money…money is not a big deal…I could live under the bridge with you if that was our only option, just as long as I am with you!” And did Ayo believe her? Hmm…he did o! Of course he had no plans of residing anywhere near a bridge or flyover but it seemed very reassuring to know that Shade was someone who would support him even if he didn’t have much; someone who would not push him into doing things that he could not do. Alas, Ayo was wrong. Only four months post-service, and no job, Shade told him that he was not ambitious. Ouch!!! Whatever happened to “staying with me under the bridge?” The writing was definitely on the wall. Well, needless to say things did not work out between them as I guess there were a few issues that one naira could not solve.

Funny enough, I find that it is always the women who are the ones who make such promises. It is not like the guys made them make such commitments at the threat of breaking up with them now? So why even bring it up? Truth be told, (responsible) guys know that they need to have money to take care of a woman; they wouldn’t want to date or marry a woman only to have her suffer. Man is meant to be the primary provider, with the woman acting as a help-meet. So we don’t need such declarations! Or I could be wrong o; maybe it serves to add weight to the depth of feeling and emotions being felt by the woman. Maybe guys see it as an ego boost when they imagine that their girlfriends or wives would not leave them even if they had just one naira!

We can excuse the relationships because after all as some guys would say, “Na me be her papa?” But money is important in every relationship, especially in marriage as the man has to provide and care for his wife. Truth be told, most women today are not even willing to settle for ‘potential’ – you know the intelligent guy that has a good first degree and has the potential to make it in life. They would prefer ready-made guys. MI raps about how his babe should stick with him “although the money is a maybe”! Laugh Out Loud!! All I can say is that he has keyed into the seemingly romantic notion of love without limits and turned it into a hit song. Sharp guy. I have seen too many marriages shake and crumble because the man had challenges providing for his wife and/or family. The irony is that this one naira part is actually part of the traditional Christian wedding vows, remember “for richer, for poorer”? Or maybe they should take that part out of the vows, like a girl I met said with all seriousness, “If he can’t take care of me, why bother?”

So in all seriousness, please, let’s not deceive ourselves here. There is no such thing as “romance without finance.” I daresay money is what makes the romance sweet sef; it is what oils the gears of love. Or do you want to be trekking when you can jump BRT; or enter BRT when you can enter okada; or enter okada when you can take a ride in a taxi? Guys please do not be deceived when a woman tells you such things like what Waje is crooning in One Naira o! it is just empty, sweet nothings and should not be taken seriously or else you might just get the shock of your life. And ladies, please don’t tell me it is a euphemism. Stop deceiving us, thank you.