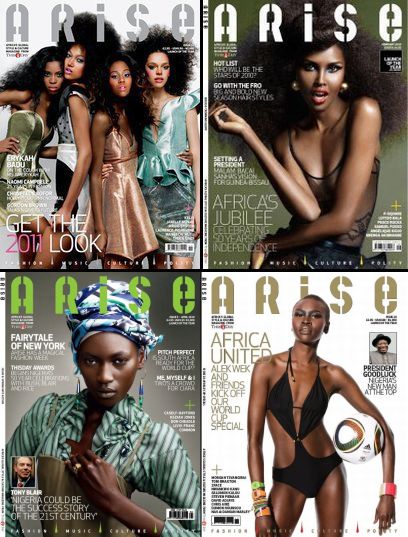 ARISE Magazine, Africa’s first global style and culture magazine, today announces the debut of two spectacular events. Following a successful run of three seasons (in 2009 and 2010) of the ARISE Africa Fashion Collective at New York Fashion Week, Bryant Park in New York, and the successful sponsorship of the inaugural ARISE Africa Fashion Week at the Sandton Convention Centre, in Johannesburg and Cape Town in 2009,

First, ARISE Magazine Fashion Week – It will be held in Lagos, Nigeria from 10 to 13 March 2011, at an exclusive venue. Africa’s Top 50 designers, selected by invitation only, by a panel of experts, will showcase their collections for 2011.

As with ARISE Africa Fashion Collective, this showcase will come as the fitting end to the traditional fashion season after Paris Fashion Week and is designed to compete with and complete the world’s global Fashion Weeks.

Then, to validate their successful collections, the very best of these designers will also be invited to participate in the inaugural and annual ARISE Magazine Fashion Gala in New York on Wednesday, 14 September 2011 during New York Fashion Week.

ARISE Magazine’s mission is to continue to promote young and established African and African Diaspora designers. This new initiative will complement the showcasing opportunities offered by the traditional Fashion Weeks around the world.

ARISE Magazine founder, Nduka Obaigbena says “ARISE Magazine is already leading the way and due to the unprecedented demand to showcase Africa’s finest designers, from Deola Sagoe, Tiffany Amber, Clive Rundle and Black Coffee, to newcomers like Maki Oh and Christie Brown and others. We feel the time is right for us create our very own series of spectacular events and show the world that Africa is here to stay at the cutting edge of international fashion.”

Related Topics:Arise Magazine
Up Next

Whether Na One Naira!…Yeah Right!