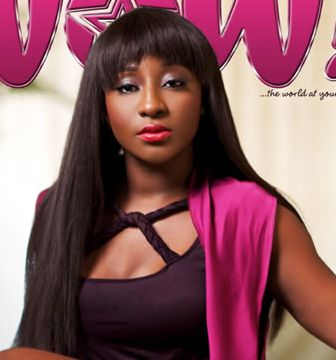 Did you guys catch Nollywood actress, Ini Edo on the cover of “Wow!” recently? Men, I actually did a double-take because at first glance I thought it was Nicky Minaj! All I could say was “Wow!!” Could this be the same lady I happened to see in the movie, Reloaded? Na wa o! She definitely had undergone some transformation (cue sounds of Optimus Prime changing to an 18-wheeler).

Now, it may seem like some sort of irony but I’m not really big on Naija movies or magazines; all I ask whenever I see a colleague reading one is, “Hey, did they write about me in this edition?” Then I proceed to quickly flip through the pages, looking at pictures and skimming through articles. Needless to say, I skimmed through Ini Edo’s interview and was a lot more impressed. This raises an issue that has always been a difficult one for me, the ability to reinvent oneself. I’m sure you know what I’m talking about: you get bored or tired of who you are and would like to add a little more depth or breadth to your persona. Allow me to use myself as an example.

All my life, I have been seen as an efiko, a nerd, a bookworm. I did not really mind the tag but it became a problem when people would very quickly profile me and put me in a box, without getting to know me properly. Also, I had issues of sustaining the level of success I had become associated with. So I deliberately chose not to study medicine or pharmacy or any of the other “bookish” courses and opted for something a lot more “flexible” (God knows that there is no easy course to study!). In the university, I tried to do things that a nerd would not do, I chased women; went to raves and parties; took up karate; drank beer; hung out at all sorts of places etc. But as they say a leopard cannot change its spots. The fear of failure propelled me to study hard to come out with a good degree, and so the tag remained. Today, the one thing that really gets at me is when I bump into people I have not seen in ages, like old classmates, and the first thing they say is, “Guy, you haven’t changed much, you still look the same!” Worst of all, an ex who was away in the US for years came home the other Christmas and said the exact same thing!! Ouch!  So I have dropped my glasses and now wear contacts, and I also try to dress a lot more informally than I used to. I have also tried putting on some weight, but no luck there. I have tried for a beer belly but it appears that all the Star in the world will not have any effect. So I intend to hit the gym to add some bulk to this slight frame of mine (I have been intending since January as part of my new year resolutions!) Anyhow, the good thing about all this is that I look younger than I am, so there!

Do not get me wrong, it is not just about the way one looks physically. One girl actually did a full 180-degree turn around: in secondary school she had been known as a “spiro” but as soon as she got into the university, she dropped her “spiro” traits, began to use her Ibo name and opted for a less spiritual lifestyle, abandoned her old friends and made new ones. OK, you might think that is extreme, but the truth is we all do some reinventing or at least yearn to reinvent ourselves. I know people who have successfully reinvented themselves from the NFAs (No Future Ambition-for those that are not aware of this acronym) that they were in school to highly cerebral and successful people. Even so called runs girls turn out to be great wives and mothers, even seemingly doing better than the “good girls”. I can not say I know exactly what causes this reinvention or transformation but guess it comes with age, maturity, a sense of responsibility, and a desire for change. I usually am very pleasantly surprised when I see that some reinvention has taken place. It speaks of strength of will and character.

What am I saying? Even at the corporate level, be it a product manufacturer or service provider, this transformation would be called re-branding! So there, even products get repackaged sometimes, with a new, exciting and attractive cover or the addition of some new feature or element… “Ini Edo now comes in a new and attractive pack; and now has Vitamin C.” Don’t mind me! But seriously I do not  exactly how the Nollywood star did it, but I must say that I like what I see.

So people, do something new, be bold and daring; get a new look; change your wardrobe; dye your hair; learn a new skill and develop yourself. Learn a new language! ¿Porque. I dunno! Because its sounds sexy? In summary a little reinvention, never hurt anyone. You don’t believe me? Just ask Ini.

The Circle of Life