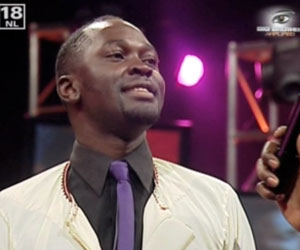 After an action packed Sunday show, Bhoke and Ernest were both evicted from M-Net’s Big Brother Amplified. Tanzania’s Bhoke was evicted first – and just when the Tails Housemates thought it was all over – Uganda’s Ernest was evicted minutes later!

Ernest had received 6 nominations from his Housemates on Monday, while Bhoke picked up 3. Head of House Danny had saved Luclay, who had received 5 nominations, and put Miss P up for eviction in his place. When he was called on by IK to reveal his decision, Danny stood and told his Housemates: “It’s that time again – you know how tough it is, but this is a job I have to do,” he said. “I saved my boy Luclay and I replaced him with Miss P. You all know what I did – now it’s up to you”.

After Uganda’s Radio & Weasel had performed “Everything I Do” and “Heart Attack”, IK took viewers back into the House. After teasing the Housemates, he got down to business. “Bhoke, please leave the House now,” he said, after a long pause. As she emerged on stage, IK told her that she had, in fact, been evicted from Big Brother Amplified. “Do you think your relationship with Ernest might have affected the way you played the game?” he asked her. “Not really, I don’t think so because I wasn’t playing a game. For me it was real,” she said.

“You and Ernest were real, or you being in the House?” he quizzed. “Both,” said the Tanzanian with a smile. When IK revealed who had nominated her, Bhoke said that Alex’s nomination hurt the most. “Because he was your boy, right?” asked IK. “I thought so!” said Bhoke.

She had her chance for a parting shot, though, by being given the opportunity to “Blow a Fuse” – giving one of the remaining Housemates a punishment they had to keep up for one week. “One Housemate will prepare a hot drink for Big Brother every night after all the other Housemates have gone to bed. They must take it to the Chat Room and sing a lullaby for Big Brother. This Fuse will last until this time next week,” read IK “Who is this Fuse going to?” he asked. After giving it some thought, Bhoke replied: “Ernest”. “What?!” shrieked the stunned Ugandan. When IK asked her why she had chosen to give him the punishment, she said “because I want him to remember me.”

IK then stunned viewers and Housemates alike by announcing that a second Housemate would be joining him on stage. “That person is: Ernest,” he told the Housemates. As Ernest emerged on stage, IK told him “Just so there’s no uncertainty, and just so you are clear, you have been evicted from the Big Brother House,” he said. “How are you feeling right now?” “This is a once-in-a-lifetime experience – it’s amazing, this is it!” exclaimed an ever-exuberant Ernest.

“Of all the people you were hanging with, who do you think nominated you?” quizzed IK. “It’s a great show and anything goes, anyone can nominate anyone,” he replied. When pressed for names, he said he thought that Karen and Luclay probably nominated him. Once he saw the list of people who had nominated him for eviction, he was surprised. “That’s a whole bunch of people!” exclaimed IK. “I just love those snitches,” said Ernest.

He had an opportunity to punish one of his Housemates by Blowing a Fuse. “Every time Katy Perry sings Firework, one Housemate must wave two pom-poms like a cheerleader and dance until the song stops. Your pom-poms will arrive tomorrow and must be attached to your belt at all times. This Fuse will last until this time next week,” read IK. “Who are you going to turn into a cheerleader until next week?” he asked. “I’m going to be real, I‘m going to throw this to Nic!” said Ernest, moments before leaving the stage.

Earlier in the show, viewers had a chance to see how last week’s evictee Michael was doing. He said that his high point had been being able to get the girls together – “they loved my attention” and getting the boys to like him – “they’ll tell me anything”. He said that he’d like to see Luclay or Karen win because of “the way they are”. Michael said he would love to visit Ghana – “and Uganda, but I’m scared! That’s where Sharon O’s from. We just connected…” he said.

The show ended with another scary moment for the Tail Housemates as IK again took viewers back into the House. “Unfortunately it’s not over until it’s over. When I call your name, please stand,” he said ominously. “Miss P” he called out. After a long pause, he said: “Miss P…. you’ve been saved” as she crumpled into the couch.

BN Bytes: Are You Ready for This Bigz Girlz? Check Out Funke Akindele’s New Promo Shots