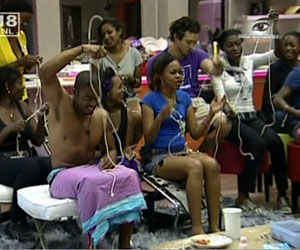 The Heads Housemates had a field day with their nominations on Monday (6 June) on M-Net’s Big Brother Amplified, putting no fewer than seven of their number up for eviction this week!

Confidence, Vimbai, Hanni, Millicent, Vina, Weza and Zeus all stand a chance of leaving the House after Head of House Lomwe saved Felicia and put Vimbai up in her place. Lomwe’s decision will no doubt surprise a few of the Housemates when he reveals it on Sunday, as many would have suspected that he would save Hanni, Vina or Zeus – particularly in light of his previous romance with Hanni.

· Zeus was a common denominator in the nominations on Monday, picking up six nods from his Housemates. His attitude seemed to be the general reasons, while others felt that he was stiff competition.
· Hanni had three nominations (from Millicent, Felicia and Sharon O) while Vina, Weza, Millicent, Felicia and Confidence all had two Nominations each.
· Vimbai, Lomwe and Wendall had one nomination each, while Sharon O escaped unscathed this week.
· Zeus nominated Vimbai and Weza, who both nominated him too.
· Lomwe also nominated Weza – adding Confidence to his list, because both are well-established “on the outside”.
· Vimbai also nominated Confidence, saying that the Ghanaian “had said her purpose has been fulfilled and she’s praying to go home”.
· Felicia was nominated by Hanni and Confidence, while Lomwe picked up his sole nomination from Weza.

The winner of Big Brother Amplified, which is headline sponsored by Coca-Cola, will be named on 31 July, after 91 days of head-to-head competition – and the power to award to USD 200 000 prize rests in the hands of the viewers.