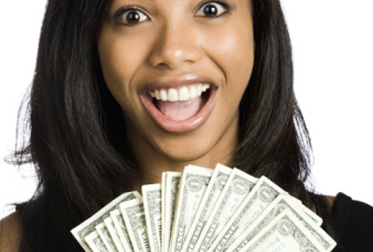 Have you ever heard girls sing along to ‘Gold Digger’ by Kanye with the switched up lyrics – “I ain’t saying I’m a gold digger/ but I ain’t messing with no broke- broke-,”. Ahem, I’m sure you get the point.

In Nigeria nowadays, it seems people place a price tag on relationships before they enter them. Yes, even men too.

What got me thinking was a casual conversation with two of my very close friends a few weeks ago, Chioma* and Yemisi. Chioma’s BlackBerry was having problems so I asked her what she was going to do and she said she’ll tell her boyfriend, so he can get her one of the new ones. She went on to say (I don’t know who asked her o) that he’s bought her 4 or 5 BlackBerries since they’ve been dating for 3 years (might I add he even got her her first BlackBerry). Chioma now joked, “I’m his sugar baby.” Yemisi then spurted out, “Enh, well my boyfriend got me my iPhone 4.” At this point, what did Nkechi say? Omo, I was stunned speechless. Then we all laughed it off and started talking about something else. But to be honest I still kept thinking about it – that I must be missing a memo or something because the most expensive gift I’ve received was a bracelet, then things like pairs of shoes and perfume. And those were for special occasions like my birthday and Christmas. Even though a little pain nudged me in my heart (ahem, you can call it jealousy – I don’t mind) I kept quiet about the whole incident until I was reminded of it a few days later.

A contributor came in to the office and for some reason the subject of relationships came up. She said her mother recently found a stack of bank slips in her younger brother’s drawer, all addressed to his girlfriend. She said her brother laughed and defended himself by asking if they had heard of the 10% rule. According to him, every guy should spend at least 10% on his monthly salary on his girlfriend, so he was just doing his part. Suddenly, it all made sense. From the friend whose boyfriend gives her money before she goes to the club, to the friend whose boyfriend’s mother deposits a monthly allowance in her bank account, I guess I’ve really been missing a memo. For me, relationships have always been about supporting each other emotionally, but never financially. When I fall for someone, I never think of how he can enhance my bank account, but my life. Don’t get me wrong, I am not calling my friends gold diggers, but as I said, they “ain’t messing with no broke- broke-”, and maybe it’s time I took a page from their books? Let me share something with you…

I once bought pizza for myself and a boy friend. The pizza was a little bit burnt and I left the burnt crust in the box. Next thing he started giving me a lecture on why I should eat the burnt part of the pizza, because his parents trained him never to waste food. Shuo, you would think he bought the pizza for me, abi for us. Or the time I wanted to buy a donut for myself and he said I should control my diet- that he can’t marry a woman who cant control herself. Mind you, I wanted to pay for my donut and I have never been bigger than a US size 8. And who talked about marriage with him sef? Mschew. Let’s just say this was the beginning of the end of the relationship. I should have paid closer attention to him when he said his mum is the sole breadwinner of the family. Turns out I was with a guy who was obviously used to watching his dad wearing the pants, whether the pockets in those pants were empty or full.

It’s bad enough that when some guys’ pockets are full, they use it to control their partners. I’ve heard of men who pay for girls so they can ‘come and collect’ their own payment in another form when they need it. From the pretty girl who calls that guy to send his driver to pick her because her car broke down, to the former beauty queen whose family now depends on her for Junior’s school fees to Papa’s medical check-up yet her reign ended years ago and she has no form of visible income. There is a clear barter system going on here that I was too blind to see when I was younger. “Love is patient, love is kind” … no be all o, Love must come with flat in Lekki too.

Gone are the days when men were fasting and praying against gold diggers. Men nowadays even pray for women to prey on them, enticing women with their wallets. I hear men joke about it, and even sing about it too! Does this sound familiar – “to ba farabale chop my money/… touch my body” or the new P-Square song titled ‘Chop My Money’ where they sing, “She must chop my money/ ‘Cos I don’t care/ I’ve got plenty dollars in my name/ plenty Naira in my name.” Lol. You gotta love P-Square. If they’re not complaining, why should I right?

Because men are not innocent in this either o. Many men aim for women with rich fathers because they know there will be some contract, land or flat in it for them. The worst is if you’re a politician’s daughter and your father is in power. Have you noticed how many politicians’ 21 – 25 year old daughters marry during their time in office? Hmm. Don’t say I didn’t warn you sha.

After all these thoughts were nagging me for weeks I knew I had to put pen to paper, or rather, fingers to keyboard. Is it ok to be a helpless romantic in today’s day and age, or must we all – men and women included – shine our collective eyes? It’s gonna take me a while to figure this out for myself but I gotta ask, when looking for a relationship, what’s your price tag and does the 10% rule apply?