Are You Ready? Bobby Brown with New Edition alongside Banky W, Omawumi & eLDee set to light up the stage at "Live in Concert with the New Edition" in Lagos & Port Harcourt 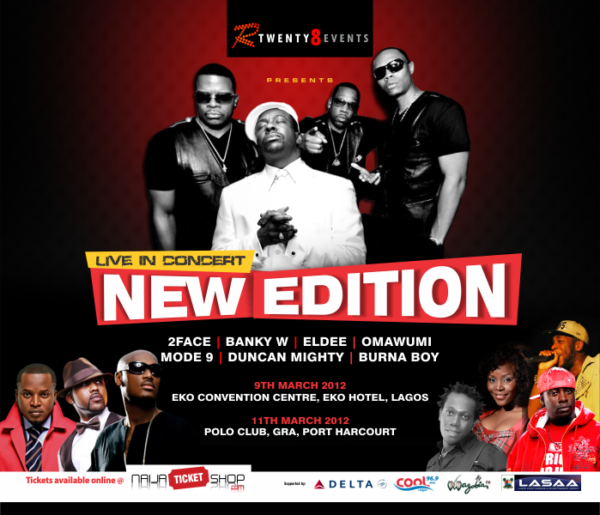 The city that never sleeps – Lagos and the Nation’s oil rich city – Port Harcourt get ready to witness a power packed musical concert set to be the talk of town long after it is gone.

The show – “Live in Concert with the New Edition” will feature Grammy award winner Robert Barisford Brown a.k.a Bobby Brown. Bobby will perform both in Lagos and Port Harcourt alongside his pop musical group New Edition and a crew of 50 band members and associates for the very first time in Nigeria.

This show for all New Edition fans is being organized by Lagos based events solutions company – R28Events will also see some of Nigeria’s most sought after musical acts – 2Face, Banky W, Duncan Mighty, Omawumi, eLDee, Burna Boy and Modenine perform on the same stage as the pop group made up of Ronnie Devoe, Ricky Bell, Mike Bevins, Ralph Tresvant and Bobby Brown. The group will perform some of their hit tracks like “Candy Girl”, “Cool It Now”, “Mr Telephone Man” and many others.

Bobby Brown according R28 Events will dedicate this tour to his former wife – Whitney Houston. So order your tickets today as it promises to be music and solid entertainment at its best.

Listen to Bobby Brown talk about the show
[audio: https://www.bellanaija.com/wp-content/uploads/2012/02/Bobby-Brown.mp3]