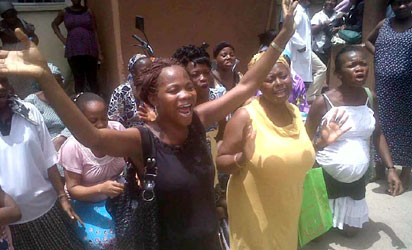 For the second time in Lagos state this month, state-owned hospitals have been practically shut down as doctors under the aegis of the Medical Guild have embarked on another strike, this time, indefinitely.

The doctors had earlier embarked on a three-day warning strike from April 11th to 13th 2011 to press home their demand for payment of the Consolidated Medical Salary Structure, CONMESS.

The strike, which is entering its third day is already having negative influences on patients and those in need of medical care in the state. For the hundreds of patients who have visited state-owned hospitals across the state in the past two days, their health needs have been left unattended to by doctors in these hospitals.

This account of a patient according to a Vanguard News report is only one out of the hundreds that are being denied of their rights to basic and affordable healthcare in the state.

Day 1
The situation at the Island Maternity Hospital was more pathetic when scores of pregnant women who already had appointments with doctors were left unattended to. A nine-month pregnant woman, Mrs Chinenye Onuke, who had been scheduled to undergo Ceasarian Section yesterday, was in tears.

Chinenye, who told Vanguard that she left her residence in FESTAC, Amuwo Odofin, as early as 6.00 a.m to keep her appointment with the doctor, said to her dismay, she arrived only to discover there was no doctor on ground to attend to her.

Asked what her next line of action would be in the light of the indefinite doctors’ strike, she said: “I have no money to go to private hospital. I do not know what to do. I am pleading with the government to give the doctors what they want to save us as women are dying from pregnancy related issues.”

Day 2
Findings by our reporters who were at the facility, revealed that the medical emergency ward was almost deserted, except for two corpses inside. The corpses which were later moved to the mortuary on the premises, were confirmed  to be those of two patients on admission who allegedly died for lack of care.

A hospital source revealed that one of the patients, a man, died on Tuesday night while the second one died yesterday morning.

According to the report, many people were caught unawares and visited the hospitals only to be turned back for lack of doctors to attend to their needs.

What is even sadder is the face-off between the doctors and the Lagos state government concerning the strike. Both parties have refused to come to a compromise and are pointing accusing fingers at eachother.

The state government had asked the doctors who embarked on the warning strike earlier in the month to appear before a disciplinary panel but they refused, saying the panel was illegal.

Chairman of the Medical Guild, Dr. Olumuyiwa Odusote said, “We have decided to embark on this strike to stop all the illegalities in the system. We want to make Lagos State Government responsible. We have supported this government because we thought it had an agenda to be responsible and at any point where we see that they are derailing, we will put them in order.”

The doctors had earlier planned to embark on an indefinite strike by the end of the month but were forced to start earlier over the claim that they were harassed by the government when they tried to have their meeting. The venue of their meeting was besieged by over 20 armed policemen who later arrested Dr. Odusote. After he was released, he said that the indefinite strike was prompted by the action of the police who came to effect his arrest.

On the other hand, the State Commissioner for Health, Dr Jide Idris accused the doctors of issuing threats but added that the government would call the doctors within the limits of the law.

In September 2010, when Lagos doctors embarked on a strike for the same issues, it lasted for three months. It is hoped that as the strike enters its third day, urgent steps would be taken by both parties concerned to end the strike as quickly and as amicably as possible to prevent a re-occurrence.

Is There Job Security Anywhere?