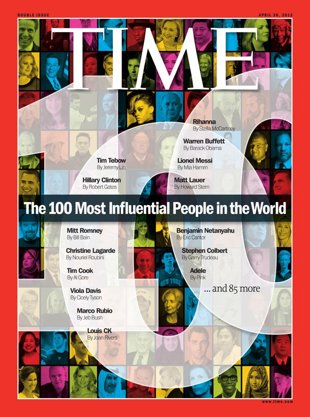 TIME Magazine, a US Weekly News magazine today released its annual list of the ‘100 Most Influential People in the World’ for the year 2012.

According to TIME,“they are the people who inspire us, entertain us, challenge us and change our world.”

The citation on Jonathan was written by Ellen Johnson Sirleaf, President of Liberia:

Goodluck Ebele Azikiwe Jonathan exemplifies the African political renaissance at a time when the people of the continent are starting to reap the fruit of their resources and their hard work. President Jonathan, 54, possesses the qualities needed at this moment of great challenges, having come to power at a crucial moment in the history of Nigeria. The country has grown out of its past of corruption, mismanagement and brutality, but the foundation of good governance is still fragile.

In two short years, President Jonathan has shown the same dexterity he demonstrated as governor of Bayelsa, the same ability to find the remedies to the many complexities of running a nascent democracy. He has spearheaded the fight against corruption and turned Nigeria into an example of good governance. He has also made a significant impact on consolidating peace and security in West Africa. From the onset of our own crisis, Liberia has benefitted from the support of Nigeria. President Jonathan not only upheld the trend but added to it. With leaders like President Jonathan, Africa is sure to move toward prosperity, freedom and dignity for all of its people.

There are 38 women on the 2012 list, more than any other year. The list was chosen by through voting by TIME readers from around the world.

Here’s a look at the names that feature in the TIME 100 list: