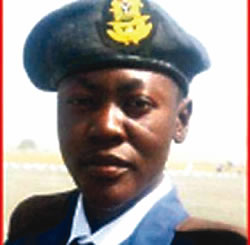 After passing through various training programmes said to have cost billions of Naira ($650, 000 each) within the country and abroad in countries such as United States, United Kingdom, Greece, Pakistan, and Egypt include 14 fighter jet pilots, Flying Officer Blessing Liman and 29 other combat flying officers were yesterday decorated at an elaborate ceremony in Abuja.

History was, Friday, made in Abuja as the Nigerian Air Force produced the first female combat pilot in the sub-region following the badge decoration (winging) of Flying Officer Blessing Liman and 29 other pilots as combat flying officers at a well attended ceremony hosted by the Chief of Air Staff, Air Marshal Mohammed Dikko Umar.

The Pilot officers who had in the last 12 months undergone various training programme said to have cost billions of Naira ($650, 000 each) within the country and abroad in countries such as United States, United Kingdom, Greece, Pakistan, and Egypt include 14 fighter jet pilots.

History making Flying Officer Blessing Liman, an indigene of Zango Kataf, Kaduna state, was born on 13 March, 1984. She enlisted into the Nigerian Air Force in July 2011 and was commissioned on 9th December, 2011. Her outstanding performance helped her in attaining the historical height.

Present at the ceremony, to add colour to the feat achieved by Liman were minister of State for Defence, Erelu (Dr) Olusola Agbeja Obada, the leadership of the National Council for Nigerian Society (NCNS), the Presidential Adviser to the President on Ethics and Values, Dr. (Mrs.) Sarah Jubril, Mrs. Appolonia Petirin, Mrs. Ihejirika and Mrs. Dikko Umar.

In her speech, she disclosed her awareness of the enormous responsibility on her shoulder as a record maker but was optimistic that God would help her to live up to the expectations of the society and the Nigeria Air Force. According to her, “I am going to work, with prayers, dedication and hard work, I know I will succeed.”

To see a lady achieving such feat in the midst of so many men is truly inspiring. Her achievement goes a long way to show that nothing is impossible with determination and hardwork.

She might have gone through her training as the only female in the group and with no other female combat pilot in the Nigerian Air Force to look up to, surely, what she achieved is totally admirable. Now, she serves as a role model to any other female wanting to follow in a similar path.

Well done Blessing. May you continue to soar even higher!

Who Do You think Will Win the Coveted Title of the Most Beautiful Girl in Nigeria 2012? Meet the 32 Contestants