Straight from The Headlines! What Everyone was Talking About this Week

It’s great to have you here once again on BellaNaija as we recount some of the major stories that made headlines across the country this week.

We sincerely hope you’ve had a splendid week. However, this week as usual has been filled with both good and bad news. One that created a lot of buzz across the country was that of a woman who beat her foster son to death after depriving him of food for days. Really sad. Also, the United States Secretary of state, Hillary Clinton visited Nigeria and promised to lend a helping hand to fighting the Boko Haram insurgency in the country.

Here’s a recap of some of the major stories that made headlines across Nigeria this week: 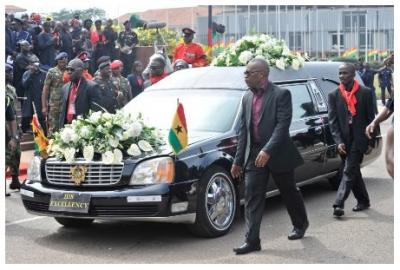 Thousands of mourners paid their last respects to the late Ghanaian  President, John Atta Mills at the state funeral held today in Accra,  Ghana. Among those in attendance were Ivory Coast’s President Alassane Ouattara  and Ellen Johnson Sirleaf of Liberia as well as the leaders of Benin and Togo. US Secretary of State Hillary Clinton, was also attending the  funeral. It is estimated that more than 10,000 people gathered in and  around the square. John Atta Mills died on July 24th, 2012 at age 68. Even though he had been known to be sick, the death still came as a shock to many  Ghanians.

No fewer than 16 worshippers lost their lives on Monday evening at a Deeper Life Bible Church situated at Otite in Okehi local government council of Kogi state. Several worshipers were critically wounded in the attack according to the local government chairman in the area. According to Colonel Olorunyomi , “unknown gunmen invaded the Deeper Life Church  in this night (Monday) during a worship service and opened fire shooting  at the worshippers” he said. He added that 15 people died instantly while the sixteenth person died in the hospital. Over the course of the week, more people died from injuries sustained in the attack.

Taxpayers in the United Kingdom are to foot the bill to revamp jails in Nigeria and Jamaica so that the convicts in British prisons can be deported without breaching their human rights, The Daily Mail reported yesterday. This is the latest move by the UK’s coalition government to persuade foreign convicts to serve their sentences at home. It was revealed that a project is currently on going in Nigeria which supports the provision of “human rights training for prison officers” while another project will construct new facilities at a women’s prison in Lagos, to reduce overcrowding. The report also claimed that funds are currently being spent in Jamaica to “assist Jamaican authorities in modernising their prison service and rehabilitation and reintegration activities.”

One person died and 18 others injured on Friday in an auto crash on Port Harcourt-Ahoada highway, Federal Road Safety Commission Sector Commander in Rivers, Dr. Kayode Olagunju has said. Olagunju told journalists that the incident occurred when a Toyota Corolla car and a Toyota Hiace bus collided. “As a result of the accident, one person in the Corolla died while 18 persons in the bus had injuries and were taken to the Ahoada General Hospital,” the News Agency of Nigeria quoted the FRSC sector commander as saying on the accident. He also disclosed that the Hiace bus was completely burnt and urged motorists to always exercise caution on the roads, especially whenever it rained.

Some relatives of victims of the June 3, 2012 Dana Air crash as well as mortuary attendants and securitymen at the Lagos State University Teaching Hospital, Ikeja, Lagos on Thursday brutalised a photojournalist with Leadership Newspaper, Mr. Benedict Nwalaka. The assailants also attacked some journalists who had gone to witness the handing over of bodies of the Dana crash victims’ bodies to their relatives. It was learnt that the attackers were trying to stop the journalists from taking photographs of the handing over. In the process, one of them seized his camera. As he was trying to retrieve his camera, the mortuary attendants, crash victims’ relatives and securitymen attacked him and some other journalists at the scene with various weapons.

Thirty persons living with HIV and AIDS have entered into marriage contract under the couple matchmaking scheme initiated by the Jigawa Action Committee on AIDS. The Executive Secretary of the Agency, Dr. Bashir Ahmad, told the News Agency of Nigeria in Dutse on Wednesday that the measure was to control the scourge in the state. Ahmad said the agency, in collaboration with the Central Bank of Nigeria, had so far trained 50 HIV positive women on various trades. He said, “The agency is encouraging marriages between the HIV positive persons to control transmission of the disease. We are also providing skills acquisition training and resettlement packages to beneficiaries of the training programme.” Ahmad further identified stigma as responsible for the spate of HIV/AIDS transmission among the rural dwellers in the state, which had risen to 2.8 per cent.

The four journalists who, with late Dele Giwa, teamed to form the news magazine, Newswatch, say they will act to forestall the publication’s “destruction” after new owner, Jimoh Ibrahim, closed it down on Monday. Ray Ekpu, Dan Agbese, Yakubu Mohammed and Soji Akinrinade said the decision was in breach of the terms that transferred the majority ownership of the company to Ibrahim. In a statement on Thursday, they vowed to resist the closure, and said they were consulting with other shareholders on a further step.

A woman known locally as Iya Anu beat her 16 year old foster son, Seubow, to death for allegedly stealing N50. Seybow was Iya Anu’s husband’s nephew. According to neighbours, trouble started after Seubow lost the N1,000 given to him by Iya Anu to run an errand for her some days back. Angered by the loss which she claimed was theft, the woman refused to feed Seubow for over four days. When the teenager couldn’t take the hunger anymore, he sneaked out to buy gala one night. When Iya Anu found out, she accused him of stealing her N50 and beat him up, using a rod. She battered him for days until he gave the ghost on Sunday afternoon. After his death, neighbours rounded the woman up and made her carry the boy’s corpse to the police station. The sad incident happened on Amosu Street, Ijegun, in Lagos.

**
How do you feel about the news that made headlines this week. Is there any other story you would like to share with us?

MTN wants you to win a brand new Aeroplane…Seriously!