BN Prose: The Small Print- Excerpts from a Novel by Abimbola Dare 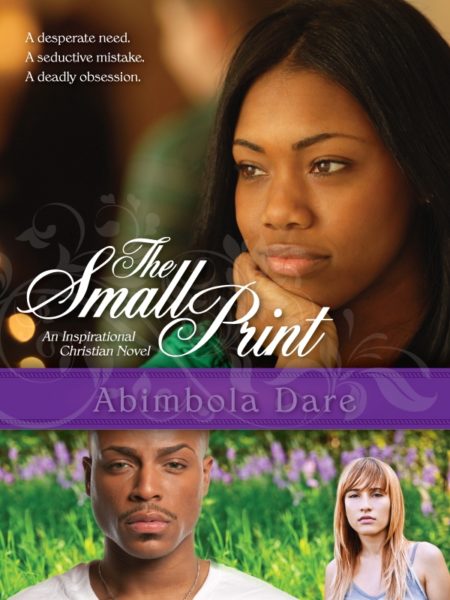 The moment he stepped into room 101 and saw Jennifer Lennox sitting behind the polished mahogany table, Wale Ademola knew he was a dead man. He shut the glass panelled door behind him with a click and glared. It had to be an illusion. He checked again. Nope. This was for real. She was here. What on earth was his ex-wife doing in his office?
“Good morning Wale.” The woman sitting next to Jennifer spoke first. Her name was Coleen something from HR. She’d interviewed him only last year, at the start of his job as a temp administrator. She peered at him. “Is something wrong?”
He started to come forward, stumbled and bumped into a stationery cupboard. “Sorry. I… I must have the wrong room. I am here for a promotion interview for the trainee project manager position.” It had to be the wrong room.
Coleen waved a piece of paper at him. “You didn’t get the confirmation email?”
He nodded. His mind swirled with questions and he tried his best to look relaxed. Had Jennifer traced him to London? Or was this a nightmare?
Coleen gave a reassuring smile. “It will be over before you know it.”
My life will be over before you know it. “Uh-huh.”
Jennifer gave nothing away with her expression, and when she glanced at him it was like she was looking right through him. As though he wasn’t even there. She shifted in her seat and the aqueous floral scent of her perfume smacked his nostrils. He coughed, spluttered. He’d given her the fragrance for her twenty- eighth birthday last year… a day before he – should he say left her? He dropped his gaze to the table.
“You look a tad bit uncomfortable,” Coleen said, concern brimming on the edge of her voice. “Take a seat.” She gestured at the only vacant chair in the room.
In front of Jennifer? God forbid bad thing. He sagged into the chair like an invalid. “Thank you.”
Beads of perspiration beneath his armpits prickled. Trouble had landed in his backyard. Jealous enemies from his village in Nigeria had chosen the best time to strike their juju, African black magic. Wale mentally sent a curse in return. Thunder fire them all. Including Jennifer Lennox.
Jennifer tossed a stray lock of curled blond hair away from her face and held out her hand. Obviously, his curse did not work. “Mister Ademola,” she said. “An absolute pleasure to meet you.”
Mister? Her performance deserved a standing ovation. He sat up straight with a tight grin, convinced his expression must look like one on a mug shot. “Same here.” His hands remained on the table, numb. If Jennifer noticed, she didn’t react. She turned to Coleen. “Ready when you are.”
“We almost cancelled the interview when Maryann called in sick.” Coleen gave Jennifer a grateful nod. “Thank your stars that Andrea came in on a short notice. She will lead the interview.”
Andrea? A chill spread across his body. Jennifer changed her name? He swallowed. “T-that’s fine.”
Jennifer pointed to the jug on the table. “Water?”
Her nails were perfectly manicured, as always, metallic blue with silver sparkles.
Rat poison would be perfect. “No. No thanks.”
She sipped water from her glass. “I will allow you a few minutes to get yourself together.”
Wale squinted at the window. Determined rays from the sun streamed into the room even though it was barely ten. Somewhere down below, a car tire scrunched against the asphalt. The engine of a bus shuddered to a stop and the doors hissed open. Stall owners’ voices were faint in the distance as they paraded sun hats and ice-lollies. A perfect summer day. Why hadn’t he called in sick? Cancelled the interview?
“Did you bring your identification documents?” Coleen asked.
He snapped his head up. “Documents?”
“Yes. I included the list of acceptable documentation in the email.” She looked a bit irritated. “Your passport?”
Crap. He’d been hoping she’d forget. “Do you have to see it now?”
Coleen’s apologetic smile had a life span of about a nanosecond. “Immigration rules.”
“Uh, of course.” Wale shoved a reluctant hand into his breast pocket. He fished out a passport that had once been vibrantly green and shook it lightly. The frayed edges coughed out a small cloud of thick, black powder.
He forced a smile. “I dropped it in a pile of soot on my way here.” Yeah right. More like good luck charm from Nigeria to distract immigration officers at Heathrow from staring too hard at the passport. They were usually wary of visitors like him coming into the UK: Immigrants with no prospects of ever returning to their country of origin. The charm had worked. Despite the filth, they hadn’t asked a question when he’d presented it. He placed the document into Coleen’s open hand. “Here you go.”
“You are a Nigerian citizen?” Coleen asked. She blew away some more of the black powder and flipped to the middle page. She studied the page for a long moment. Wale kept his focus on the space behind her head. To the right was an old Xerox photocopier churning out documents with an industrious hum. He stared at the papers as they floated unto the receiving tray, counting in sync with slow eye movements.
“Your UK residence permit is a temporary one? Expires in eight months?” Coleen’s eyebrows rose in a probing arc. “This is a permanent position.”
Wale swallowed, wiped his palms on his thigh. “I will be entitled to a permanent residency real soon.”
Jennifer suddenly perked up, fluffed the ruffles of the stripped orange shirt underneath her suit. “You certainly will. Won’t you?” Her Irish accent was more pronounced than usual. As it often was when she wanted to be sarcastic

Abimbola Dare was born in Lagos, Nigeria.   She started writing as Bimbylads the blogger, in 2006 before she turned her passion to writing what she calls Fiction With Intention. She has written three novels, all of which have received excellent reviews, including the hugely popular short story The No-Nonsense Wife which has been made into a short film. She attended Vivian Fowler Memorial College for Girls in Nigeria, and has a degree in Law from University of Wolverhampton, an Msc in International Project Management from Glasgow Caledonian University where she was awarded the best performing student by the Association of Project Management, and an MA in Creative Writing from Birkbeck University. In 2016 and 2017, she was recognised as one of top 100 Most Influential Writers in Nigeria under 40 by the Nigerian Writers Awards Association. She lives in the UK with her family.