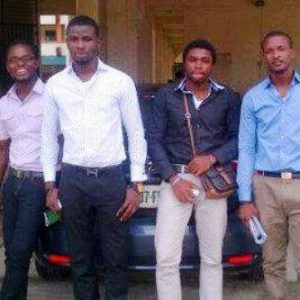 The pain of losing a child must be one of the worst things any parent could ever face. It is hard to imagine the emotional pains the parents of the slain students of University of Port Harcourt must be facing at this time. We extend our condolences to the families and pray that God grants them the fortitude to bear the irreplaceable loss.

The barbaric way the boys were murdered, though painful, is one that must be protested and some of the parents of the slain victims have made their voices heard, calling for justice.

In a telephone interview with the BBC  in London, the fathers of two of the victims, Lloyd Michael and Chiadika Biringa spoke about their sons, how they heard about their death and how they feel towards the people who murdered their sons.

When Lloyd”s father was asked if he ever thought something like this could happen, his response was: “Never in my life. I never ever thought this sort of thing could happen in my country in the 21st century. Never. This is barbaric.”

When asked if he spoke to any of the people in the crowd who helped to kill his son, he said “Yes I did, I spoke to one or two persons… but nobody was able to give me a clue”

Despite all that has happened, he said “I still believe that what has happened to my son and his friends will never ever happen again if the right steps are taken.”

Chiadika Biringa’s father spoke about the anger he felt about the murder of his 20 year-old son “I’ve never seen such level of callousness been meted on an innocent soul, a child. It brings about anger and that anger is now with me until justice is done on this matter.”

He added that he would like the murderers to be caught and for justice to prevail.

Similarly, Chinwe Biringa, mother of the murdered Chiadika Biringa, who was a 200Level student of Theatre Arts at UNIPORT wrote a heart touching petition to the Senate President. The petition dated 9 October, 2012 with the title – Petition: Gruesome murder of my son at Aluu, University of Port Harcourt host community – was signed “Heartbroken mother”

Part of the letter which was addressed to the senate president reads: “my name is Mrs. Chinwe Biringa. I am the mother of Mr. Chiadika Biringa, a second year student of Theatre Arts at the University of Port Harcourt (UNIPORT). My husband is a very senior staff officer at the Nigeria National Petroleum Corporation, NNPC.

“My son turned 20 years old this week and we gave him pocket money to celebrate it with his friends. On Friday morning, we were called by my second son, also a UNIPORT student that all was not well and he was hearing bad rumours that villagers at ALUU, the host community of UNIPORT had murdered four students. I immediately rushed to the scene only to see my son’s dead body being taken away naked to a mortuary in UNIPORT Teaching Hospital. I could not believe my eyes and collapsed.

“What did my son do? What did the other three young men who died with him do? First, we heard that the four students were alleged to have stolen a Blackberry phone and a laptop computer. This could not be further from the truth. My son has had a Blackberry phone and in fact a laptop computer since he was in primary school. No way could my son steal such a common thing as a cell phone which every village woman now owns.

“We have been subjected to several gory videos and pictures on the internet. This shows that someone filmed the whole barbarism from beginning to end. My son and his friends were savagely beaten and burnt to death while villagers at ALUU watched. All this has been caught on film!

“The video shows that all this was filmed in broad day light which suggests that they were killed after 7.30 am. Further investigation has revealed that they left their friend’s house at ALUU at about 7 am to go and prepare for lectures.

“To waylay them and beat them with planks until they died like chicken is the most savage thing one can witness in Nigeria of 2012. First they were stripped naked, marched around like frogs and then beaten to death. What savagery and bestiality.

“My husband and I want only two things, namely: (a) To clear the name of Chiadika, (b) justice

“Your Excellency, every responsible parent knows what I, my husband, and the entire family are passing through over this beastly murder.

“Again, and for emphasis, the film shows everything in clear view and all the perpetrators must answer for their crimes.

“We want Justice. Those who murdered my son must face the wrath of the law.

The parents are calling for justice and it would be a shame on the Nigerian Government and security agencies if they are denied this justice. We join them in calling on all relevant agencies. Yes, we want Justice for Aluu 4.

Do you think Lagos is the Most Innovative City in the World?