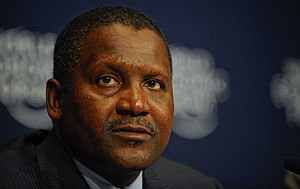 For the second year running, Nigerian business mogul, Aliko Dangote tops Forbes Africa’s 40 Richest list with a net worth of $ 12billion from $10.1 billion in November 2011.

According to Forbes, most of his net worth lies in publicly traded Dangote Cement which operates in 14 African countries. Nicky Oppenheimer of South Africa comes in once again as the second richest, with a $6.4 billion fortune – down $100 million from the previous year.

Standing tall at the end of the list is Hakeem Belo-Osagie, the 57 year old Harvard-trained petroleum economist with an estimated $400 Million net worth from the oil sector.

To read all about Forbes Africa’s 40 Richest and their profiles, Click here