Guess Who's Back on the Scene? "Living in Bondage" Nollywood Star Rita Nzelu shines again at "International Games" Premiere in London Rita Nzelu with her son

She was one of the pioneering Nollywood stars with roles in blockbuster movies including “Living in Bondage” and “Nneka the Pretty Serpent“. Rita Nzelu exited the scene in 2003 when she relocated to the United Kingdom to live with her husband. It has been nearly a decade and now she is re-entering the Nollywood sphere with a new movie “International Games“.

Rita recently spoke to the Sun Newspaper and here is what she had to say about her career, life in the UK, family life and more.

On Why She Left Nollywood at the Peak of her Career
I left Nollywood and traveled out of Nigeria because of marriage. I left so as to join my husband. I believe a woman should join her husband and not the other way round. In the past seven or eight years, we had two children in between. I can tell you, I now have three boys to take care of. My husband and two sons.

Family over Career
Not exactly. I decided to concentrate on my family but of course I was abreast with happenings in the industry. I didn’t attend all the functions in town, and so was not seen by all at all times but I was in touch. It was deliberate because during this period, I got a full grip and bonding with my family. So, I can begin a gradual return now.

“Missing Out” on the Nollywood Boom
I do not feel I missed anything. There is time for everything as far as I know. I left Nigeria and Nollywood when God wanted me to leave. I am very happy that what came in terms of marriage at that time and which took me away came when it came. I do not miss Nollywood in the manner that you imagine or because actors are well rewarded and getting endorsements these days. Those times were gone. The Bible says there is time for everything. I do not feel I miss anything and neither do I have any regret leaving. You win some and lose some in life. Well, I got a strongly bonded family.

“Living in Bondage”
I played the role of Tina, a call girl, in Living in Bondage. Chief Kenneth Nnebue of NEK had watched me rehearsing at the National Theater and invited me to come for audition in his office, which I did and won the role. I later went on to do Nneka The Pretty Serpent, Blind Trust, Unforgiving, Ukwa and so on. I cannot recall all the movies I did.

The Present – “International Games”
It feels good. It feels very refreshing to be back… like a breath of fresh air. It is like renewing a marriage vow. I tried to keep a lot of my private family matters very private, so I kept everything low about my family. I have always not wished that my very private came into the public.

It is a movie very dear to my heart. I had been away from the screens for more than seven years so we needed to play according to standards and professionalism required of us. It is a film directed by Tchidi Chikere who also put the story together in a wonderful screen play. I play the lead role while Jackie Appiah also plays big in the film, which tries to mirror the condition of life of Africans living in Europe as they relate with fellow Africans and their European friends as a whole. It tells tales of the shock in cultures between the British and the African. It throws light on what happens when two cultures meet in drama. It is loaded in intrigues brought about by the emotions of love. We also have several other very talented actors and actresses in the movie. All of us are happy with the production.

Love, Husband & Family
We (My husband & I) met in December 2003 and we did the traditional marriage in March 2004. He had proposed marriage two weeks after I met him.

There was this particular kind of bonding that held us together. It was nice to be with someone who knows you well. It was not riches or being cute. There was a real connection somewhere. In marriage and family matters, there is more to it than riches and being handsome. If it were riches or being handsome, they may have faded after eight years. Yes, my husband is very much handsome but loves me dearly. He was so serious and genuine so I got convinced that he meant well. I have heard stories of those who get married and get abandoned by their husbands in Nigeria to rot away because they also have other romantic entanglements. I only worried about that but got a conviction that it wouldn’t be so for me.

He is such a caring man who loves to see me progress from point A to B. He accepted me for who I am. He stood his ground gidigba even after a lot of discouragements. I could see he was genuine. He did not beat about the bush. He just told me point blank ‘let’s get married’. We only courted for two months and we got married.

Before my marriage, I had set time for myself that after about eight years of break, I would return to the system. Yes, it was between me and my God, I had said so because my family matters so much to me. We seem to have bonded well; my husband is my first baby while the two other sons follow.

Beauty Secrets
My main secret is using no chemicals and their likes, leaving God to do the rest. I am only natural. When people ask me what I do to look the way I look, I laugh because I am just a natural person and would readily appear natural. I will regularly dress in blazers and inner tops. I also could be found in jeans to feel free to work. But I dress to suit the occasions.

You can read the complete interview via the Sun Newspaper

Photos from the premiere of “International Games” 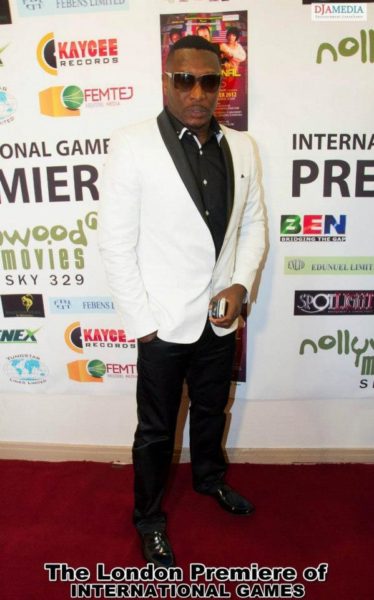