BellaNaija Style is back with another exciting edition of BN Pick Your Fave.

Today, we have an ex-beauty queen, a reality star and two actress rocking the same dress by Stella McCartney. The British design label cemented itself as leading global fashion brand in 2012 and we have spotted numerous fashionistas in Europe, America, Asia and Africa including Tiwa Savage and Nkiru Anumudu in the label’s pieces.

The beauty ambassador who also donned a pretty Roland Mouret dress at the party, opted for sleek up do and accessorized her outfit with diamond earrings and a pair of black suede cross over straps with almond peep toes by Miu Miu. They retail for £257.50 on Net-A-Porter.

Chinese big screen sensation, Shu Qi rocked the same dress to the press conference of her latest film, Journey to Best in Beijing, China in December 2012. The 36 year old actress, who swept her hair to the right, accessorized the outfit with gold hoop earrings, a statement ball ring and a pair of electric blue patent pumps.

She also opted for a blue nail polish to complement her shoes.

She keeps it fiesty on Bravo’s Real Housewives of Atlanta reality TV show and fans of the show can’t get enough. On Sunday 2nd December 2012, Kim Zolciak was spotted at the “Watch What Happens Live” Clubhouse to chat about the current season of the show and her controversial departure in the same Stella McCartney dress.

It was snowing in London this weekend but it didn’t stop British actress/presenter, Amanda Holden from rocking Stella McCartney’s one shoulder illusion dress.  Using a patriotic umbrella to shade herself, Amanda looked all glam at the red carpet of the Britain’s Got Talent auditions in London.

The 41 year old accessorized the famous frock with black earrings, a silver ring and black pumps.

The Stella McCartney Dress – Want to rock this same dress as Agbani , Kim, Shu and Amanda? Get it on Neiman Marcus for $1670 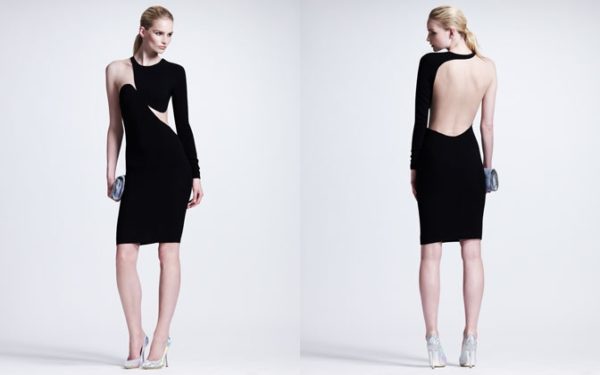 I Love Davido & I Have a Tattoo to Prove It! Davido Super Fan Tattoos His Name on Her Back