#NewLeadership Series With Chude Jideonwo: Is there really something called a ‘Youth Agenda’? 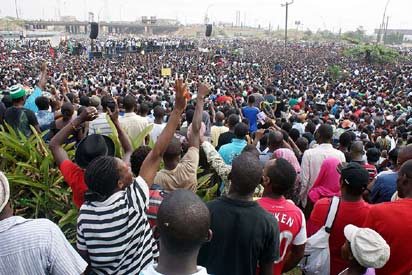 One of the things that have riled me in my journey through youth development is the nebulous concept of a ‘youth agenda’.

Time and again, as I have faced an audience, discussion panel or interview, I have been asked a question on the ‘youth agenda’ and it’s almost always, “What do young people want?”

Usually, the person who asked the question is utterly uninterested in the matter and is only asking a generic, simplistic question, for which he also expects an equally generic, simplistic answer.But, for me, this is a particular vexatious question.

It is even more troubling because I have seen many a young person immediately lurch into an answer – sometimes insisting that the reason young people are not making a difference in and for our country is because we have not yet defined what our ‘agenda’ is.

Very worrisome. As worrisome as the way everyone assumes that because I am a young person, I have to be something called a “progressive”?

What does that even mean? When and where did we sit and decide that all young people think the same way and will act the same way?

Can there really be a singular agenda for any diverse demographic in a democracy? Is there also any such thing as a male agenda? A children’s agenda? An adults agenda?

I think not. Unlike the Nigeria Labour Congress, or the South-South Caucus of the National Assembly, there is no one unified body to present an agenda for young people, and neither should they be.

The youth population is dynamic. In that demographic, we have conservatives and liberals, those in the People’s Democratic Party and those in the Congress for Progressive Change; some who believe fuel subsidy should be removed totally, and others who think it’s the band-aid we desperately need. Some feel the same-sex bill is a distraction, others believe it is a welcome affirmation of who we are as Nigerians; some believe it is time for the nation’s split, others believe in that enduring concept of “One Nigeria”; some young Igbos think Ojukwu is a hero for Biafra, others see him as a man unprepared for a war he started.

It is impossible to have a youth agenda, and by God there should be none.

Of course, there is a reason why we have this anomaly in the first place, and it is a simple one. You and I, who fancy ourselves as smart and cosmopolitan, have left defining the debate and even who we are to the Aluta youth’, and I mean that more as a descriptive than derisive term.

When we surrender the social space to obtuse young people in the National Association of Nigerian Students and the National Youth Council (and certainly, there are brilliant,well-meaning young leaders in these collectives), we end up with politicised, even militarised language complete with sound and fury.

We become like our fathers, mouthing clichés and rhetoricthat thus cannot be constructive in problem solving. That is why, for an uncomfortably long time last year, there was the spectacle on the national scene where “youth leaders” continued to pressure the president to ensure that the minister of youth development had to be a young person below 35.

After rejecting overtures to join this campaign, I began to sit and ask myself, “How did we even have these kinds of young people speaking for you and I, in the first place?”

Perhaps the larger nation should also ask itself this – how did it turn out, for instance, that Lamidi Adedibu was making leadership and governance decisions for the likes of your parents and mine in Oyo State? Because, we have ceded the space for defining us to those who cannot even define themselves.

More to the question in this particular instance: if there is no one ‘youth agenda’, why do these ‘youth leaders’ mouth it so often? Ah, that one is very easy: Because it makes it easier for them to secure political patronage in your name.

When they go to our disconnected political leaders and tell them, ‘this is the youth agenda’, the political leader who is afraid of complex decision-making and the kind of micro-targeting that the Barack Obama campaign is universally recognised, finds that his life has been made easy. Then he throws money or power at the “youth leader” and assumes the youth are ‘sorted’. Like the clamour for a youth minister, that is what it ultimately boils down to – what part of the ‘cake’ is for the youth?

I believe young people need to re-order that discourse in order for us to be clear about what it is we really want when we ask for “change” in our country.

As I have said in response to the question on what the youth agenda is – it is no more or no less than what every Nigerian capable of thought and action is seeking for: a country that works for everybody, and that allows self-determination for its citizens.

The means (agenda, if you may) towards which we want these might vary – some want privatisation, and others socialism; others want technocrats in government, and others better structured political parties – but the entirety of Nigeria is desirous of the same set of things: Can we have regular power supply? Can our infrastructure work on at least a uniformly basic level? Can we have roads, schools, hospitals, homes, and skies that are safe? Can our educational system be lifted to match the rest of the world? Can our oil wealth be judiciously managed? Can corrupt persons be punished?

To the extent that there is an agenda for young people – that simple collectivity of wishes, for a Nigeria that works, is the only agenda that we have.

Everything else is a distraction.

Young people joining or forming one political party? Nonsense, really.The multiplicity of voices that we have presently is crucial both for a functioning democracy and the new, knowledge economy.

More young people to be allowed to contest elections? Inconsequential. As everyone from the leadership of the youth council to Dimeji Bankole has taught us, Nigeria will not be different just because the ages of those in power suddenly changes – what matters is the age of their ideas and the strength of their character.

Those are the agendas that we should be focused on as a nation: serious-minded, solution-oriented engagements, and ideas that will actually lead to productive outcomes – jobs, knowledge, opportunities, capacity, engagement.

It is time for you and I to find ways to join – and change – the ongoing conversation about what our desires as young people should be; because, if those who claim to speak for you continue to demand only for their own piece of patronage, then we’re just all riding full speed towards the wrong destination. And this is why you cannot afford to be be unconcerned with what other young people are doing – and saying – on your behalf.

Aww…Quality Time with the Family! Peter Okoye of P-Square shares Holiday Moments with Lola and Cameron in San Francisco