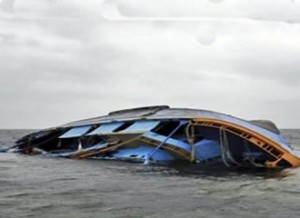 The National Emergency Management Agency (NEMA) has confirmed that a wooden boat carrying 166 people about 40 nautical miles off the coast of Calabar capsized on Tuesday with only two known survivors. The boat which left on Friday from the remote town of Oron, in Cross River state was heading to Gabon.

As at yesterday, the mood at the morgue of the University of Calabar Teaching Hospital, UCTH, where 45 corpses of some of the victims have been deposited was that of gloom and people thronged the hospital to try to identify the remains of loved ones.

Official sources said the victims’ corpses were brought to Calabar instead of Malabo, where the mishap occurred, because they were believed to be Nigerians.

A Marine Transporter at the Calabar Inland Waterways, Ikechukwu Egwu confirmed the incident to National Mirror adding that the passengers of the boat were mostly Igbo traders who were travelling to Gabon. He said they boarded the wooden boat because it was cheaper.

How sad. May their souls Rest in Peace.