Bomb Blast at a Bus Park in Kano Kills 25 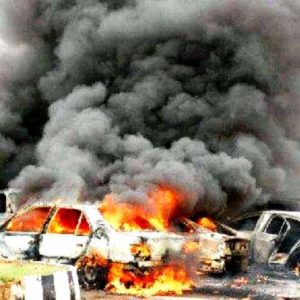 Some explosions that hit an inter-state luxurious car park at the Sabongari district of  Kano State this evening has killed about 25 people.

The victims were in a luxurious bus at the area where buses that convey passengers to other states of the country, particularly the southern states, take off from.

A Reuters reporter who was at the scene counted 25 bodies. However, Channels TV reports that 60 people were killed and dozens were injured.

A member of Igbo traditional council in Kano, Tobias Idika, who confirmed the explosion to Channels TV said there were over 200 people in the bus.

“IED was kept inside the luxurious bus which was about to leave Kano to Lagos, people were frying like chicken here and you know there are over two hundred people in this bus when the two IEDs exploded,” he was quoted as saying.

The area has now been cordoned off by Military and Policemen.

No group has claimed responsibility for the attack yet.