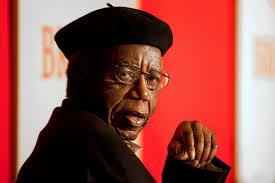 There was a professor who stayed beside our house in Benin City, Edo State. He wore shorts and his glasses hung from his neck by a string. Everyone called him ‘Prof’. My mum was a Literature teacher in Golden Touch College, one of the nearby secondary schools. After finishing her collection of literature texts, I desired a new source. That was when I stumbled on Prof’s library. It was made up of a single bookshelf. This shelf was taller than me, and took up the expanse of an entire wall. This discovery set off weekly trips that saw me dashing in and out of his house to get a novel.

Since I returned all the books in good condition, prostrated whenever I came into his compound and returned a book before picking another, Prof let me be. Out of curiosity, he called me one day. I approached him timidly, holding loosely the copy of Chinua Achebe’s ‘Things Fall Apart’ which I had just finished reading.

And I proceeded to tell him the story of the village that was doing just fine till the coming of the white men. I must have gotten incensed when I described Okonkwo’s whipping by the white man. I must have gotten emotional when I described Ikemefuna’s death (murder). From then on, he always stopped by on the road to ask what book I was reading, responded excitedly to my greetings and smiled whenever I came to ‘raid’ his library’. When the time came for us to leave Benin City, his library was one of the things I felt bad at leaving.

This was my first introduction to the literary works of Chinua Achebe. My reaction was one of awe and a desire to experience what the characters lived. I became fond of fufu, and tried to swallow large handfuls like the characters in ‘Things Fall Apart’. I requested a mosquito coil for my room, as I tried to create a rustic setting. I made inquiries about the possibility of getting a hurricane lamp-the type made of palm kernel husks. I swallowed air before speaking to mimic a baritone like the strong, manly Okonkwo. I must commend my mum for indulging these fantasies.

As I grew, I re-read his books. It was like returning to an old friend. This time, I understood them from a higher plane. I understood better the themes of cultural appreciation, history and negritude.

My favourite work by Chinua Achebe remains ‘Morning Yet on Creation Day’. In it, I discovered essays as an art form. It taught me to speak my mind, be principled and tell my story. I saw that in the instance when an expatriate housewife tried to tell him how he should have written one of his books. He calmly told her that the tasks of a housewife and art critic do not go hand in hand.

He taught me the importance of confronting history. In that anthology, he published a rejoinder he (earlier) wrote to Tai Solarin when the latter accused him and other Nigerian writers of writing in the English Language, and thus not helping the development of their mother languages. It was a long settled issue, but he published it for the sake of history.

This theme is one I would see in Adolf Hitler’s ‘Mein Kampf’ where he published stories on long settled issues like the French Invasion, to show the imprint of life at a certain time. I learnt that history prevents us from sinking into past issues; it helps us understand our present.

In the twilight of his life, he was sad about not a few things. He watched Nigeria sink deeper into a mire of corruption and marginalization of the Igbo. He showed his dissatisfaction by rejecting National Honours twice (in 2004 and 2011). He was incensed by the pervasive unintellectual pop culture. He rejected the million dollar offer by American gangster rapper, Curtis Jackson a.k.a. 50 Cent to use his intellectual property in a film. He showed the power of Rejection-how it can be used for good.

His most recent book and long-awaited memoir of the Nigerian-Biafra war, ‘There Was A Country’, is both sad and angry-a book by a writer looking back and mourning Nigeria’s failures. It is an awakening and a clarion call. For us- who learnt from him-to take on the mantle.

In two months, I will publish my first book (A Distant Memory). I would never have found my voice and the confidence to tell my story without a childhood steeped in his works.