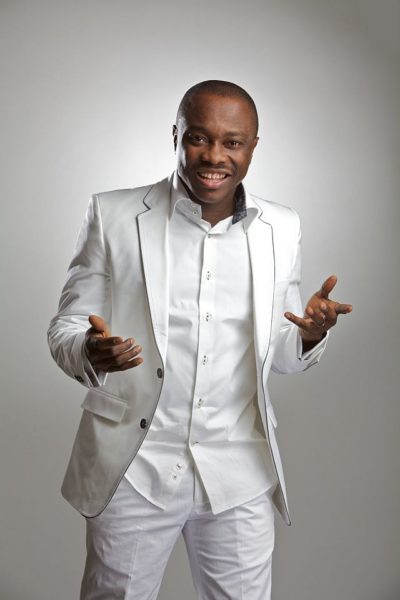 Nigerian superstar comedian, Julius Agwu is about to turn the big four-Oh (40) in just a few days, on April 7 2013, and the swanky dresser will be celebrating it in a similar fashion, pardon the wordplay.

Yes, I said 40. It’s just a tad bit ‘funny’ how time flies because it seems like it was only yesterday that he was making Makossa parodies – “I buy kuli kuli, them no give me change”. And now, the UNIPORT Theatre Arts graduate is married to the beautiful Ibiere and father to the super cute Zahra.

The multi-talented comedian, musician and actor will be unveiling his autobiography, “Jokes Apart – How Did I Get Here” that same day and according to theNETNG, the auto-biographical book is being edited by Toni Kan.

The Port-Harcourt-bred Julius Agwu has been in the entertainment industry for well over a decade – making comedy albums, acting, hosting an array of comedy shows; spearheading humanitarian efforts, raising social awareness, earning accolades and a lot more in and out of the country.

This is definitely something to look forward to as we finally get a chance to see Julius‘ journey behind the scenes, with all its ups and the downs; it’s “funny”s and “not so funny”s; there will surely be a lot to learn from his new book.

Also, we hear that the Reellaif Entertainment CEO will be having a swanky party on his birthday, invitation only that is, and will be exclusively previewing his new TV Show, “Jokes Apart” for his guests. With its location still under wraps, I guess it’s safe to say, with 2Face & Annie Idibia‘s festivities done, this is the next big party to look forward to this year.

Happy Birthday in advance to a contemporary Nigerian comedy pioneer! Click HERE to find out about Julius’ “Laff for Christ’s Sake” event taking place this weekend.

More details to come soon so keep it locked on BN