Nigerian Idol Top 10 Contestants Light Up the Stage at the Breakout Night - Vote for Your Favourite! It was a night of redemption for most of the top 10 Nigerian Idol finalists, as the contestants burst out of their shell and gave some of the strongest performances seen and heard this season. Contestants performed their personal favourites and many of the performances got glowing reviews from judges Yinka Davies, Femi Kuti and Jeffrey Daniel, as well as guest judge, DJ Jimmy Jatt.

Coming straight after the elimination round that saw the sad departure of Immaculate Victoria, who flew in all the way from the US to compete in the show and crooner Vicci, this episode saw contestants rise to the challenge after they experienced a close brush with elimination in the last show, and some harsh words from the judges.

Amara started off the night, taking on Jennifer Hudson’s ‘You Pulled me Through’, and the judges were not pleased with the performance. Next up was Moses, who decided to go British, choosing ‘Breathless’ by Shayne Ward. The judges liked the performance, but warned that he had to learn to sustain showmanship throughout the performance and not just belt out the high falsetto notes on the end. Kome took on Whitney Houston’s ‘I Have Nothing’, probably the biggest song of the night. Yinka Davies called it a “fair effort”, but was not blown away.

Dani Angus picked change the tone of the judges, by selecting an oldies ‘To be Loved’ by Jackie Wilson and wowing the entire judging panel. Femi Kuti showered him with high praise, saying, “…You have amazed me with the power of your voice.” Debbie Rise took it even further by singing Alicia Keys’ ‘Fallin’, and Femi Kuti told her it was simply, “Best performance so far.” Joe Emmal kept his cool while singing Beyoncé’s ‘Listen’ from the ‘Dreamgirls’ soundtrack. He earned a standing ovation from Jeffrey Daniel who told him: “You brought the fire!”

“It was weak,” guest judge DJ Jimmy Jatt told Efezino, whose choice of the monster Rihanna hit ‘Man Down’, failed to pay off for the singer, as the other judges also panned the performance. He was more upbeat about Abasiakan’s rendition of Mariah Carey’s ‘Always Be My Baby’, calling it hypnotic. Sefeeyat took on one of the world’s greatest love songs ‘At Last’ by Etta James, and unfortunately, the song was too big for her and she was told, “It was too powerful for a novice—like David and Goliath.” JayFeel ended the night with his strongest performance of the season, singing Chris Brown’s ‘Crawl’.

The power to decide the fate of one of the contestant lies in your hands, Nigeria, so vote by texting the number of your favourite contestant to 33680, from any network. You can also vote for a contestant by dialling his/her number of any using an Etisalat line.
The top prize for this season is worth a superb $100,000, in which the lucky winner will get: 7.5 million naira in cash, a recording contract also worth 7.5 million naira, and a brand new SUV. Runner-ups will not be left out as they will be given prizes to the tune of 10 million naira. 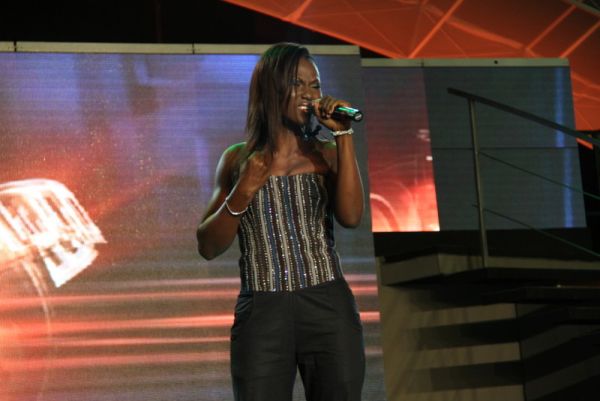 JayFeel presenting Yinka Davies a drwaing of her

Visit www.nigerianidol.com for compelling back story videos, juicy behind the scene news, and get a taste of what is coming. For the latest information, Like the Nigerian Idol Facebook page www.facebook.com/NigIdol, and follow Nigeria Idol on Twitter at www.twitter.com/NigerianIdol, and you could be eligible to win some fantastic prizes, including the opportunity to be live in the studio for a recording.