Ngozi Okonjo-Iweala, Nigeria's Finance Minister is Forbes' 83rd Most Powerful Woman in the World | See Who Else Made the List 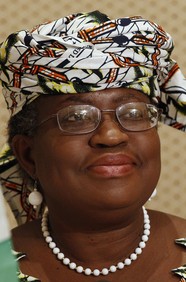 Today Wednesday 22nd May 2013, Forbes released its annual list of The World’s Most Powerful Women.

According to Forbes, the list is made up of 100 women who made the most impact. They include top politicians and CEOs, activist billionaires and celebrities.

Ngozi Okonjo-Iweala, Nigeria’s finance minister also makes the power list. The 58 year old Harvard-educated finance minister who has spent one year in office after a failed bid for the World Bank presidency, moves down from the 81st position to the 83rd.

Joyce Banda, President of Malawi is up from the 71st position to the 47th and Ellen Johnson-Sirleaf, President of Liberia also makes the list. She is at the 87th position, down 5 from last year.

On the international level, Angela Makel, a German chancellor and a member of the 27-member European Union retains the number one slot.