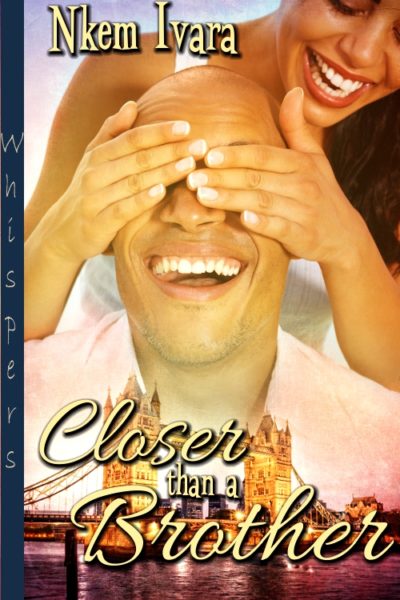 “Could you zip me up, please?”
Daye swallowed as he zipped up the dress, desperately trying not to look at the fastening of her pink lacy bra. He imagined what it would feel like to slip the dress off her shoulders, unclasp her bra and hold her pert breasts in his hands. He closed his eyes as he thought of planting feathery kisses all over her back till she moaned out his name in pleasure.

“Daye…Daye! So what do you think?” Sami’s soft voice roused him out of his daydream.
“Erm…yeah, good,” He looked away from her, cleared his throat and hoped his voice sounded normal to her, because it certainly didn’t to him. If he told her what he really thought, she would run and not look back. He couldn’t risk that.
“Good? Is that all you can say? I have tried on three different outfits and you’ve barely had anything complimentary to say. What’s the matter with you today? Are you ill?”

She reached for his forehead. He stood quickly and walked to the bedroom window of Sami’s Borough twelfth-floor flat. The skyline of the square mile stretched out before him but he hardly noticed. His senses focused solely on the woman in the room.

“I’m not ill, just a bit distracted, that’s all.” He didn’t want to have to deal with the feel of her skin against his. What did she want from him? Blood? Well there was definitely plenty of that rushing to his groin now. He shoved his hands into his pockets and kept his back to her so she wouldn’t see the bulge in his trousers.
“So tell me then, how do I look in this dress?”
Stunning, sexy, drop-dead gorgeous, absolutely divine. “I think it’ll do fine,” he said, still looking out the window.
“How would you know? You’ve barely looked at me.”
Oh! He’d looked plenty. He’d seen how the champagne dress fit like it was sewn on to her, showing off her curves. He’d noticed that it stopped just above her knees and made her already long legs look even longer.
“Daye, whatever is the matter with you? You’ve been acting really strange today.” She walked up to him and put her hand on his shoulder. Her touch burned through his shirt.

He turned around to face her and smiled. He wanted to kiss the frown off her face. “Hey, scrunch-bunch, I’m fine, really.” He’d nicknamed her when they were back in school as she had a tendency to frown whenever she was concentrating.
She smiled and punched him in the arm.
“Ow! What was that for?” he howled in a mock protest, rubbing his arm.
“That’s what you get for calling me ‘scrunch-bunch’. So it’s this one then?” she asked, swiftly changing the topic
“You look beautiful.”
“Really? Do you mean that or are you just saying it to placate me?” Sami asked, raising her eyebrows, smoothing her hands over her hips as she looked at him.

He swallowed as his eyes followed her movements, wondering what it would feel like if those were his hands. He hadn’t intended to say the words out loud. He’d been thinking them and they just slipped out.
“I mean it. He’s a fool if he doesn’t take one look at you and propose at once.” He smiled, but his heart was breaking at the thought of her spending the rest of her life with someone else.
“Thank you,” Sami smiled and threw her arms around him.
He put her away from him before she got too close and felt the evidence of his arousal.
“Why don’t you finish getting dressed? I’ve got some errands to run. I’ll call you later.”
“Aren’t you going to stay and vet my date?” Sami pouted.
“Not this time, hon.” He’d had his fill of approving her dates when he so wanted to be in their shoes. Today, he didn’t trust himself enough not to punch the lights out of the lucky guy. “Have fun.” He winked at her, then walked out of the room and shut the door behind him.

He let out the breath he’d been holding as he got in the lift and hit the button for the basement car park. As he walked out of the lift, he opened the car with the remote control and let himself in. He leaned back against the head rest and gripped the steering wheel till his knuckles ached.
He couldn’t do this for much longer. Keeping up the charade of a acting brotherly to Sami was nigh on killing him. He was in love with her, had been for a few years now. But she had no idea. She still treated him like the big brother she never had.
__________________________________________________________________________________________________
Nkem Ivara is passionate about words and enjoys a good read, particularly fiction. Over the years, she has dabbled into writing every now and again but finally decided to take the plunge and do it seriously. She has written a few short stories and blogs at The Wordsmythe’s Weblog. Her first book, a romantic novella called Closer Than A Brother, was published in March 2013 by Whispers Publishing and is available as an ebook on Amazon. When she is not enjoying banter on Twitter and Facebook, she can be found playing several games Scrabble and Ruzzle, all at the same time. You can follow her on Twitter @thewordsmythe.The book can be purchased here – Amazon UK