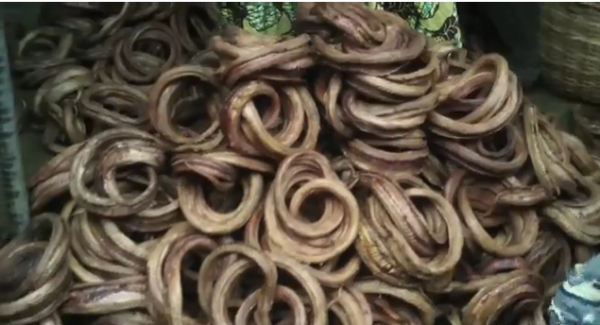 If you ask me, the things in the picture looks like dried fish. But if you look closely, you’ll figure it out. The Battabox team recently showed us that there’s a market for canine cuisine in Lagos. Now, in the same town of Badagry, Odunayo finds out about the trading of our slithery reptiles commonly feared .

So while some people are scared of snakes, we find out from this video that they can actually be used to prepare tasty African food.
“They bring the snakes from the Republic of Benin,” says Bati who has been selling it in the Badagry market (near Nigeria’s border with Benin) for many years now. And customers come from across South-West Nigeria like Ondo and Oyo state to buy.

“People really love snake! They come from far and wide to eat!” says one young woman is buying a large bag, full of snakes – “We buy from here and then use it to cook as Pepper Soup… its tastes to delicious and sweet – it tastes like fish.”

BN Bargains: Get a 40-50% Discount off Wrist Watches from WatchLocker.net

Why did Julius Agwu get in Trouble in London? Watch this Video for the Scoop