It's a Countdown! Nominations for The Future Awards Season 8 Close in 5 Days 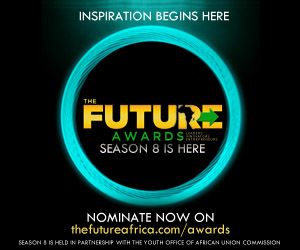 The Central Working Committee for The Future Awards, which is going Africa-wide this season, has announced that nominations for the 8th season comes to a close come Sunday 16th June 2013.

“Nominations for The Future Awards Season 8 has been open for about a month and so far we have received thousands of entries from young and inspiring Nigerians with amazing innovations and works,” said Chude Jideonwo, the executive director of The Future Project. “Following our calendar, our board of highly experienced judges are going to undergo sessions of intense decision making to certify persons who will make it into the nominations list that will be published in June.”

The awards are judged over a two-month period, supervised by a central working committee, a board of judges and an independent audit committee – an 8-year rigorous process with checks and balances that has produced many of Nigeria’s most prominent young leaders in the past decade.

This edition is hosted in partnership with the youth office of the African Union Commission, based in Addis Ababa, Ethiopia, and nominations for the awards’ biggest prize, Young Person of the Year to be Africa-based.

ACTIVITIES LEADING TO THE FUTURE AWARDS 2013 INCLUDE:

“Nominations are still on,” said Jideonwo. “Please nominate any inspiring young Nigerians between 18 and 31 in the categories above by going to the website www.thefutureafrica.com/awards. Those without Internet access should call or SMS 08022226712. As this year’s campaign declares: Inspiration begins here!”

The event holds in August 2013. There will be no public voting for The Future Awards 2013.