Tiwa Savage: "I am Not a Sex Symbol" | Nigerian Singer speaks on her Debut Album, Competition & Growing up in Isale Eko 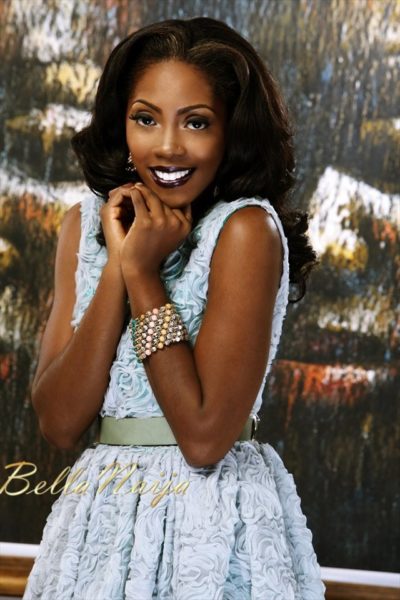 It’s Tiwa Savage! From her style to her chart topping singles, the Nigerian chanteuse knows how to get the attention of the media.

Her anticipated debut 19-track “Once Upon a Time” album (With two bonus tracks) was slated to drop today 14th June but has been pushed back a few days.

On behalf of 323Ent N Mavin Rec, We are sincerely sorry we have to Push @TiwaSavage #OnceUponATime Album due 2 uncontrollable circumstances

However, just before the release of her album, she sat down with ThisDay Newspaper to speak on her album, growing up in Isale Eko and what stardom has changed about her.

But one of the most buzzed about headlines is Tiwa’s response to being a sex symbol. “If you ask my family, I am not like that. I am a laid-back person”, she tells the publication. Well Ms Savage if you say so, but we loved your Love Me Love Me video.

Tiwa didn’t shy away from speaking on her fiancé. She spoke on why she wrote a song for him “You know the culture here. If you’re not married and just focus on your career, people would start asking questions. He understood my journey; he was able to push me career-wise and he encourages me a lot. So, I had to do a song for him.”

Check out more details from the interview
On why it took 2 years to drop her debut album – This album is from my heart and it’s something that I worked so long for. A lot of people wondered why it took so long and that’s because we had to go through a lot of legal processes to clear some of the samples that we used and that took months. Also, we wanted to work with some notable producers like Warren ‘Oak’ Felder who worked with Nicki Minaj and Rihanna. So, we had to work round their schedules and that’s why it took so long. This is an album that I don’t want to be the usual Nigerian album with patchy tracks from beginning to end. I want it to have a meaning.

On competition with female singers – Why should I be scared of competition? Like I said on stage, you have Nicki Minaj, Rihanna, Beyonce, Kelly Rowland and they’re all female artistes and they’re all big stars in the US. Why should it be only one person that will be known for quality music among female singers in Nigeria? I am actually glad that more female artistes are coming up.

On fond memories of Isale Eko days – Growing up, I was like a tomboy. Back then, I didn’t care about make-up or bags or shoes, I was very free. I had a very healthy upbringing. My parents made sure I was really grounded. I had loving brothers and I remember playing around all the time when I was a kid.

On what stardom has changed about her – I was a little more out-going but I am now a bit more reserved. Some people like saying they haven’t changed a bit when they start making more money, but that’s a lie. I think you change because you’re more wary. You want to be careful and trust less easily. I think people around me have changed too. They expect more. I’m under a microscope always. I might make a normal mistake but it will get blown up because it’s Tiwa Savage. So, I am more wary of what I do and say in public than I was before.

Get Your Latest Movie Tickets On Tripican.com | Star Trek, After Earth, Letter To My Mother, Hangover 3, The Great Gatsby & Lots More Now!

Swift Networks acquires the 4G Business of Direct on PC