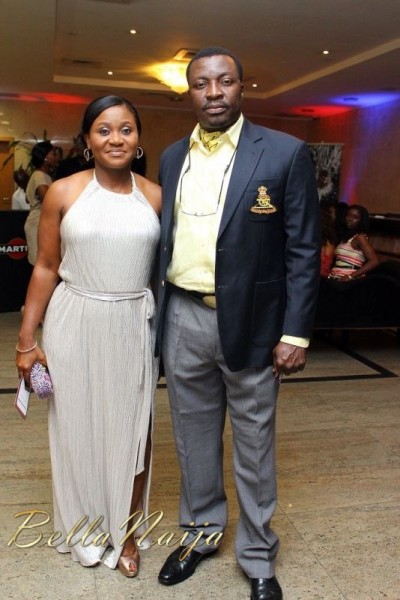 “Stella, you keep putting yourself out there for criticism”

“Another day, another boring chauvinistic list about what men want.”

Those were some of the comments by BellaNaija readers on Stella Damasus‘ article on Keeping Your Man. Yesterday we published the post which the Nollywood star said is for married women. (Click Here to Read)

If you follow superstar comedian Ali Baba on Twitter, you will know he occasionally engages his followers in some interesting topics. Recently, it was What Made Your Guy Leave You.

After a lot of criticism, the comedian posted a response on his official Facebook page. He also gave his thoughts on Stella’s article.

Sometime back, in March, I was advising a babe on how to make a man stay. Some comments posted in reply to my status were that men are only controlled by their third legs, money, yansh, boobs, beauty and ego.

I tried to highlight a very serious point that babes were missing.

And that is, EVERY MAN WANTS BETTER. WE DO NOT WANT TO FEEL THE ONE WE LET GO WAS BETTER.

Not too long ago, I read some wild and wide criticism that greeted what Stella Damasus wrote about keeping a man.

To some, wrong as they were, Stella had no business telling anyone how to keep a man. I believe she does. I actually think she knows more than she revealed.

Growing up in Ojo Cantonment, my Dad and I were walking back from his friend from a Soldier in the Education Corp of the Nigerian Army, from Gongola state who had been made a Major.

Just as we took a turn, from the Officers’ Mess, a naked mad man was running towards us from the opposite direction, shouting Mad Man… Mad man… To my surprise, My Dad, who was a military man, told us to run for cover.

So he dragged me behind a kerosine tank, pushed me to the ground and kept looking to see what the mad man was running from. Meanwhile, some two Fulani men who used to come into the barracks regularly to read palms of anyone who yielded their hands to them, had been walking behind us, before we took cover. They kept walking.

On the heels of the Fulani palm readers was another mad man, brandishing a UTC cutlass. Not Machete. Cutlass. The type used in felling trees. That type that reminded one of Prince Nico Nbaga’s bell bottom trousers back then.

He was swinging the weapon of death as he pursued… It became obvious to us from where we were crouched that the madman had no one in mind as a target. He was after anyone he could lay his eyes on. Because, soon as the Fulani men, vanished at the end of the Block, he gave up on that chase and followed one Man selling Festac 77 sleeveless Adire.

Mr Adire seller was actually laughing at the way the Fulani men took to their heels. So, this time I had to laugh when I saw how the amusement on his face changed into fright. He took off and jumped across the gutter by Palmy Bus stop. He continued running even after the machete carrying mad man hand found new targets.

Sorry I digressed. Hope you are still with me.

My Dad later told me a proverb in urhobo, “AVUE ODIERO, NE EKI VHENRHEE!”. Which means you do not need to tell a deaf man that there is chaos and uncontrollable commotion in the market. He can see. That’s all he needs.

Back to Stella Damasus’ write up. We are not all perfect. That said, when a Musician writes a love song, do you stop listening to the love song or letting the lyrics connect to your relationship because the singer has divorced 8 times or has not been able to hold a relationship longer than 3 months? I don’t think so. I think Stella did well. If you like go call police.

Back to the HASHTAG I talked about earlier, #WhatMadeYourGuyLeaveYou. Many ladies missed the point as they always often do. They were talking about how men are polygamous in nature, Cheats, irresponsible, not ready for commitment, gigolos, lack ambition, lack self control, think with their third legs… BLA BLA BLA.

I need to mention at this time, that I was at that time preparing to talk to young ladies who were looking to settle down and finding the right guy. And to tell you the truth, a lot of the ladies missed the whole point by a mile or 2. They need to read Stella Damasus’ piece.

It’s easy for a lady to say, a guy was not serious that’s why the relationship broke up. Or to say, he used her and dumped her for another lady. Fine. That is what they think made the guy leave. But to be honest, was that all there was to it?

I would like you to know that, that is not entirely the truth. A guy would always weigh his options. He would want to know if he is getting the best. Or if he can see the best coming soon.

Before a lot of ladies eat me raw, let me explain. I do agree that it’s a two way street, but I can only speak for the WAY I HAVE BEEN ON. I AM AS STRAIGHT AS THEY COME. I KNOW AND HAVE KNOWN ONLY WOMEN.

Have you as a babe listed some CORE 10 things that you think you have that will make a guy not want to leave you?
Do you also have some other unique things that a guy will not get anywhere else?
Ok, lets agree he likes your breast, your bum bum and your soft body. What has any of those got to do with respect, the tone with which you talk to him, showing you are happy to be the one he chose, supporting his dreams… Does he like blowjobs? Do you give him same? Does he like talking? Do you listen? Some girls are funny, they will admit to knowing that the other girl beats them in several departments, yet still say, they don’t know why he moved on to her. Really???

There several things that makes a man make up his mind that it is you or otherwise. DONT get it twisted… If he finds out that someone has 15 CORE things that you have only 3 of and even the 3 are sometimes canceled out by the bad things like nagging, pride, greed…that have formed your character.

Your own don set. You are sitting there comparing yourself to someone who has 13 things, more than you and is willing to tolerate his weaknesses and learn more. Yet you are quick to say, you don’t know what he sees in “that girl”. Hey girlfriend, your beauty stands no where near the towering personality and good heart “that girl” has. Better recognize.

I know I have stepped on that last nerve you have been tolerating me with. OYA delete me. I even need space to add people who tolerate and think like I do.

I rest my case.

Do you agree? Let us know!

A Country that Has Failed to Realize its Potential! Watch the [email protected] Talk by CBN Governor Sanusi Lamido Sanusi – “Overcoming the Fear of Vested Interest”