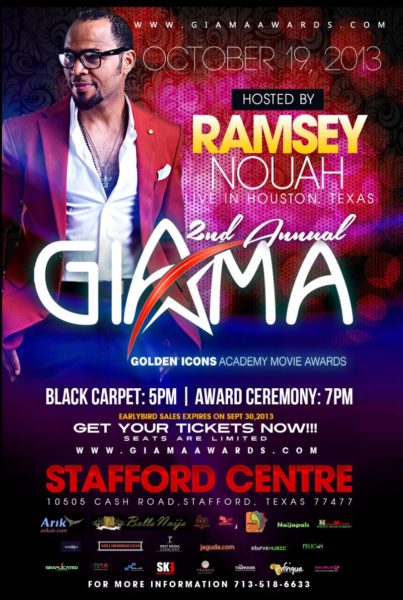 It’s time for another award show and this time it is set to captivate a live audience on Saturday 19th October 2013 at the Stafford Center Performing Art Theater in Houston Texas. The Golden Icons Academy Movie Awards (GIAMA) will commence with greetings from highly sought-after actor Ramsey Nouah, as this year’s GIAMA Awards host.

The GIAMA organization is poised to bring you this highly anticipated event of the year in the United States, featuring exclusive performances by the industry’s highly-acclaimed stars and comedians. The headlining entertainers will be announced soon.

So don’t forget to get your tickets today at www.giamawards.com.

Toke Makinwa: “Check Your Man”! Nigerian Media Personality speaks on “To Snoop or Not to Snoop”