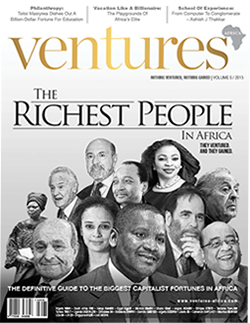 Will the real billionaires please stand up! Ventures Africa magazine has jumped into the rich list arena by publishing their inaugural ranking of the richest people in Africa today.

According to Ventures Africa, there are 55 legitimate dollar-billionaires in sub-Saharan Africa! Who are they?

Three women make it to the rankings. The richest of them is Folorunsho Alakija, a Nigerian fashion designer and oil tycoon who is worth about $7.3 billion by our estimates. Isabel Dos Santos, an Angolan investor who is also the daughter of Angola’s President Eduardo Dos Santos and Mama Ngina Kenyatta, the widow of Kenya’s first President also made the cut.

The combined fortune of Africa’s 55 billionaires is $143.88 billion. The average net worth of the members of this exclusive club is $2.6 billion while the median age of the richest people in Africa is 65 years.

Nigeria, South Africa and Egypt lead the pack with the highest number of billionaires at 20, 9 and 8 respectively. Algeria, Angola, Zimbabwe and Swaziland only have one billionaire each. In all, there are 10 African countries represented on the list.

Commenting on the rich list, Ventures Africa’s Publisher Chi-Chi Okonjo said: “Ventures Africa’s Rich list is the most definitive guide to wealth in Africa. With our understanding of the culture of wealth on the continent and our proximity to its sources, we have been able to compile a comprehensive guide.“

Ventures Africa is Africa’s leading business magazine and news service. Founded by Chi-Chi Okonjo and edited by Uzodinma Iweala the bi-monthly magazine is distributed across Africa in print and globally on the Internet, and as an App.

You can find out more via  richlist.ventures-africa.com