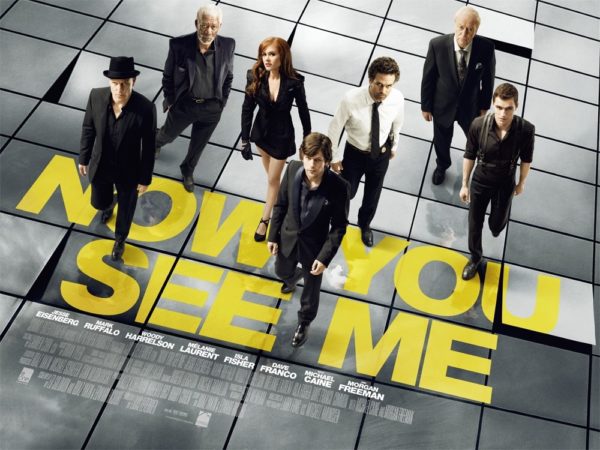 When it comes to magicians you definitely won’t see our next ‘trick-move’ coming, unless you pay close attention. But the thing is, the closer you think you are, the less you’ll actually see.

I am guessing you, our dear readers were lost for a minute there. I am really sorry guys, but lets just say the movie to be reviewed today, Now You See Me left its mark on me. So let’s get right to the review.

The Synopsis
Now You See Me tells the story of four street tricksters/magicians who are assembled by an anonymous sponsor who has them performing on large stages under the name “The Four Horsemen”. But not only are the four horsemen performing magic shows to please the crowd and change the world in their own little way, they are also trying to make it into the mythical/legendary order of magicians called ‘The Eye’.

To make it into The Eye, the four horsemen must first magically break into a bank’s vault in Paris & empty it while performing a show in Las-Vegas, Steal from their rich sponsor and give it to members of their audience (I wonder why they weren’t called The Robin Hoods™) and lastly, they are supposed to discredit Thaddeus Bradley played by the legendary Morgan Freeman, an ex-magician who goes around uncovering the tricks employed by other magicians.

Now that’s a ‘To-Do’ list with a full plate.

The Script
Now You See Me is a mind juggler which for an inpatient mind will get you tripped off quit early into the movie and have you checking your wrist watch and the exit more often than you can count. In fact, I predict with my magical instincts that if you could, you would skip through the scenes till you get to the end credits. Yeah, Merrit just happens to be my middle-name. But then like I said, if you are patient, this will be a very enjoyable movie for you.

Boaz Yakin most familiar for writing other movies like Safe and Prince of Persia: The Sands of Time, Ed Solomon known for Men In Black and Charlie’s Angel, and writing new comer Edward Ricourt which this happens to be his first familiar project all crafted the story and script for this movie and for starters; I felt like they were going for shock value. They just wanted to jolt the audience which is the idea of a crime thriller and they did get what they wanted, but they went too far. Simply without dropping spoilers; if I was the one pulling the strings I wouldn’t be as heavily involved to the point of getting my ass whooped and almost dying in a car explosion just to see things through. I think they didn’t know what to do at some point while writing the movie and decided while passing blunts to give it to the hulk.

The Directing
French film director Louis Leterrier whose most famous films include the first two Transporter movies, The Incredible Hulk and Clash of the Titans remake did a remarkable job in putting this together. The lightning, the effects both on stage and off stage, the CGI…a clean blend. It is definitely one of his better works till date.

The Acting
A circus of Jesse Eisenberg, Morgan Freeman, Woody Harrelson, Mark Ruffalo, Isla Fisher, Dave Franco and Micheal Caine. Not like they were all super spectacular in their roles but none failed to please. I would say Woody as Merrit McKinney was a personal favourite. Jesse has always been one to portray the smart-but-cocky-blabbermouth and I feel like Hollywood is starting to put Jesse Eisenberg in a box. His two major and most popular movies (this one and Social Network) has him playing the characters which seem quite identical. He could use some reinventing, some stepping out of his comfort zone to show the whole world there’s more to him.

My personal highlight in the movie was the exchange of banter and threats between Michael Caine and Morgan Freeman. I’m just here wondering who is gonna act Morgan Freeman’s roles when he leaves us.

This earns a Soda and Hotdog.

Good movie. It’s fun and I recommend you go see it, but some little screws here and there were loose. Looking forward to a way better sequel.

Thanks for reading the review and if you have seen the movie, please don’t forget to drop a comment below and lets know what you think. Thanks!