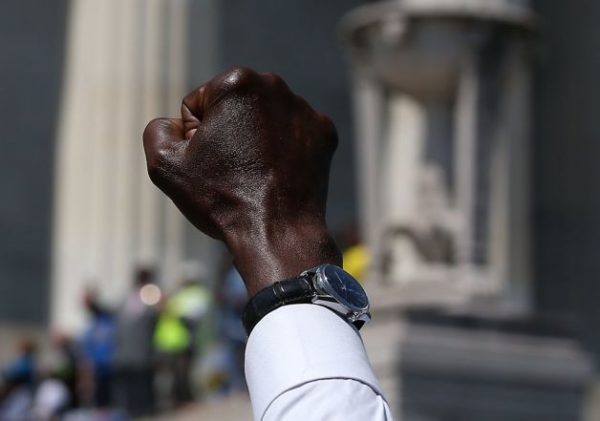 I sent a link to one of my essays to a senior Nigerian and he sent me a DM on Twitter which said:   ‘So what are you the youths going to do about all this?’  {Read the essay here}. I didn’t reply because I hate empty words and didn’t want to string a couple of sentences together if I didn’t believe them in my heart of hearts.

In the same week, I attended the Trayvon Martin protests outside the American embassy in London. Upon leaving, I was conflicted. On one side, I was pleased with myself at taking a decision not to be passive and sitting at home tweeting #fuckGeorgeZimmerman. On the other, I questioned the success.

I arrived there at about 5.30pm by which time the Embassy had closed. It wasn’t like we got the opportunity to interact with workers or prevented people from going in or out which would surely have attracted more attention. I also didn’t feel too comfortable with the extremist demonization of Barack Obama and the American state by the protest leaders. I have a legal background so I understood the technicalities of the law that allowed George Zimmerman to be acquitted, so whatever outrage or displeasure I felt was tempered by that.

At the end of the day, Obama is one person who cannot impose his will on the entire country as we can see with his proposed healthcare policy. Also, what is the probability that the chanting of a few hundred people in London would impact the legal system of the state of Florida. If the protests in America that had more star power did not achieve anything, what difference could we make? I put some pictures on my blog and over the next couple of days, my mother sent me an email telling me she was proud of me as she had been oblivious to that particular case. She wasn’t done. In fact, she won’t have been my mother if she didn’t follow with the caveat “You know when you come to Nigeria, you can’t do this.”

In January 2011, when there were protests over the fuel subsidy removal, something she said stuck with me. “When people are tired, they would go to their houses and beg to go to work. We are used to suffering and smiling. We would cry and complain but we’ll get on with it“.

I’m reminded of this in the wake of the outrage with what was interpreted as the Senate’s desire to legitimize underage marriage. Everyone piped up decrying this. I liked the fact that something had piqued the attention of my ignoramus friends but I had serious concerns. For one, I could decipher from my interaction with people and some of the tweets I saw that there was a lack of understanding of what was at stake. It seemed more like people were talking because they wanted to feel among the ‘cool kids’ and show off their social consciousness.

Every now and then, we get this fad causes that capture our attention and inspire us to voice our displeasure. Recently, the subject of our outrage being the revelation that taxpayers money to the sum of $1.6million was used to purchase two armored vehicles for one of the more ineffective Ministers.  The online activism and outrage tends not to translate to offline activity. By the time, it’s ripe to take action, the short attention span that plagues our generation would have struck meaning and we would have moved on to another cause. “Light Up Nigeria” and the “Enough is Enough” movements gained more traction online than in the real world.

The problems they were supposed to alleviate are still rampant serving to underline their failure. It’s one thing to wear t shirts with slogans and tweet, it’s another to successfully fashion a way forward. If a straw poll were taken of all those who were on twitter voicing their displeasure, I won’t be surprised to find that most of us would not even be able to answer a question wondering how the #childnotbride issue was resolved.

A wiser man than I am goes further to describe us as “masochists who not only endure repeated painful policies, processes and practices, but indeed relish it. And that damns us as consenting adults to the chaos that is our national life.” Strong but absolutely irrefutable words. I am as guilty as the next man and whilst I could say I have made attempts in my own way, I would be fooling myself.

As a people, we struggle to take collective action. And without strength in numbers, any effort is doomed to fail before it takes off. Moreover, we are members of a society that is “democratic”. Our politicians don’t take us with the seriousness they should as they know that we can’t challenge them as we should. They keep finding new ways as if asking themselves “Those people are complaining again. Oya! Let’s do something that would keep them talking“. We have earned for ourselves an F9 in earning accountability. And what are the most effective means of getting the government to act? Petitions haven’t particularly been successful. It is one thing for the people to speak and another for the government to listen and this is something we struggle with.

It’s time to look in the mirror and rethink our approach.