BellaNaija Style isn’t taking a break this season, we will constantly be giving you a lot of stylish posts to feed all your style yearnings.

There are a LOT of photos here, so if you can’t check them out (which will make you miss out), check out the first post on the event. HERE

Toke Makinwa in April by Kunbi 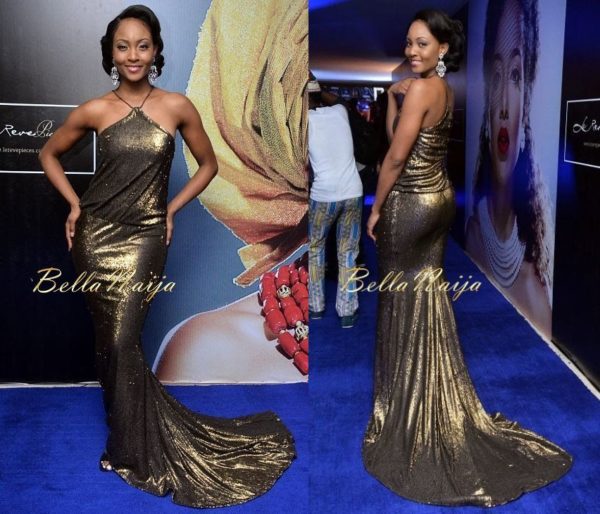 Ugonna Omeruo in House of Nwocha

A (Pretty) Vision in White!

Check out her second look to perform on stage. 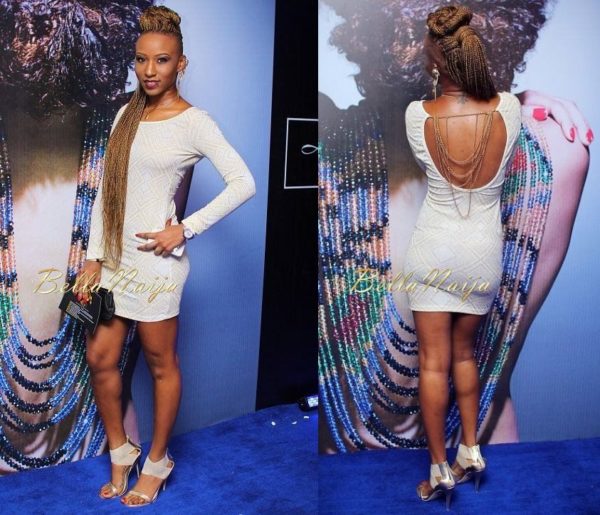 Michelle Dede in House of Nwocha

All Dressed in Black 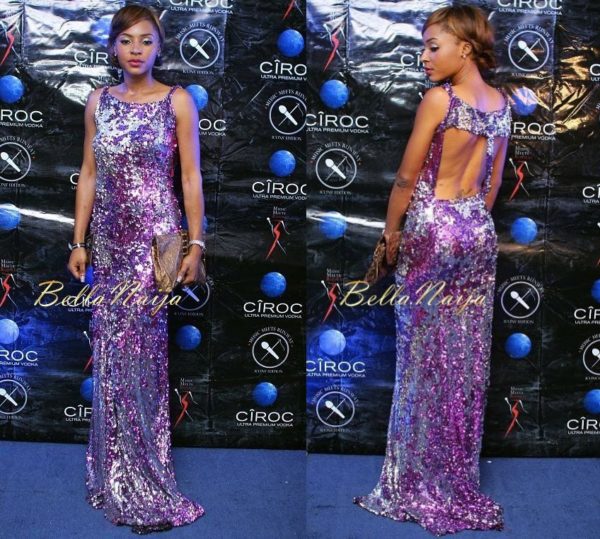 Vimbai Mutinhiri in House of Nwocha 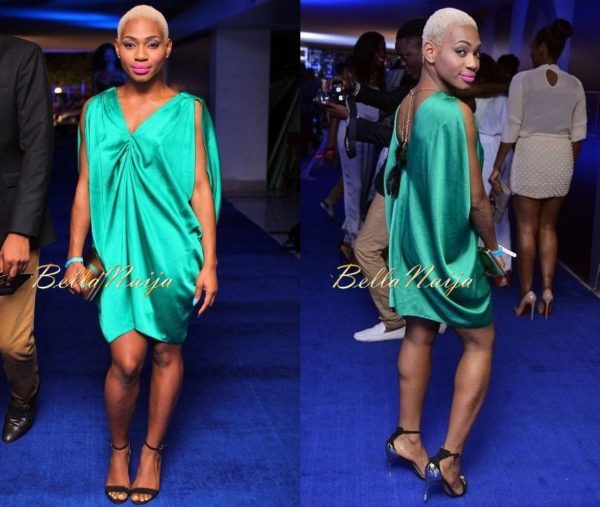 Kunbi Oyelese in April by Kunbi

Gbemi Olateru-Olagbegi in April by Kunbi

Soliat Bada of CEO Dancers rocked a bandage dress on the red carpet, then changed to fierce little number. 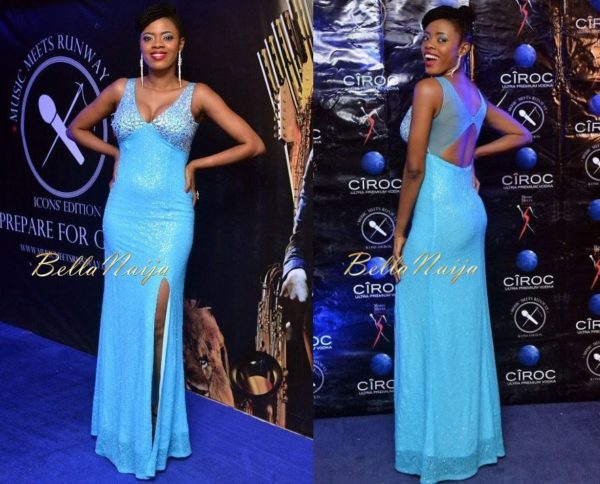 It’s Christmas, we have extra for you.
On Stage Fashion
You’ve gotten all the red carpet scoop, now it is time to take a look at the must see fashion moments on stage.

Angela Simmons went for a safe colour (black) on Saturday night, but this isn’t your everyday LBD.

The Bridget Awosika number was a fashion delight with its asymmetric cut, sheer detailing and silk material that swirled around as Angela strut the red carpet and runway.

She later changed into a monochrome floor length dress by Kiki Kamanu. She accessorized with silver earrings and black pumps.

IK Osakioduwa
Proving to be one of the best dressed men in 2013, the Nigerian media personality showed-off his sartorial edge like never before. 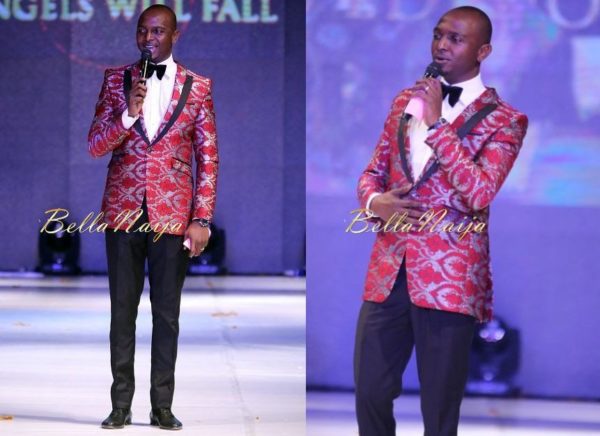 His first look was a red-and-silver brocade blazer with black tuxedo lapels. He styled it with a white shirt, a black velvet bow tie, black pants and black shoes.

A lot of male celebrities shy away from colour at events; they seem to always to stick to black, navy and brown. But IK made a bold suave move with this multi-coloured blazer and waist coat.

Which is your favourite look? 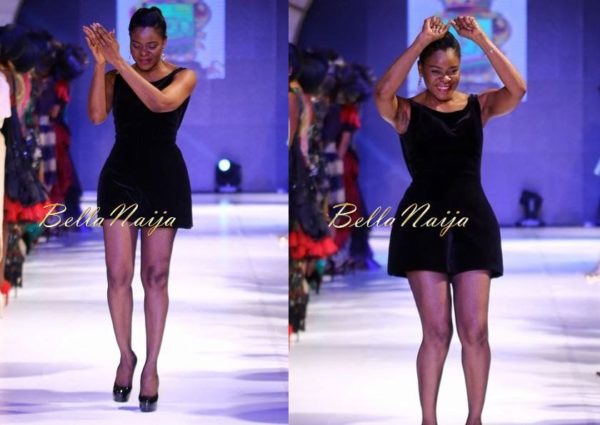 Iconic Nigerian designer Deola Sagoe sent models down the runway in some of her most elaborate and creative pieces yet. It was filled with red carpet dresses, party frocks as well as something for the owambes.

After displaying the amazing body of work, she took her final wave and bow in a sleeveless velvet short pantsuit. She accessorized with gold drop earrings, a gold bracelet and black pumps.

After giving the audience an eye full of fashionable pieces to linger in their minds for a long time, Ohimai Atafo of Mai Atafo Inspired was seen on the runway taking his bow in a black blazer, white shirt, black tie, jeans and black shoes.

Lanre DaSilva Ajayi showcased her Spring 2014 collection yet again at the 2013 MMR. Although we had seen the collection multiple times (duh, it is part of the BN Style team’s job *winks*), we still couldn’t take our eyes off the pieces.

She got on stage in a sequined dress from the collection.

Boy have we missed new collections from Ituen Bassey.

The creative director of Ituen Basi gave guests an eyefull on Saturday night. And when it was time to take her bow, she looked simple and chic in white print dress.

After arriving on the red carpet in white, she chose a shimmering silver fringe dress to perform. Tiwa looked like the perfect show girl in the mini frock, which she accessorized with silver sparkly heels. 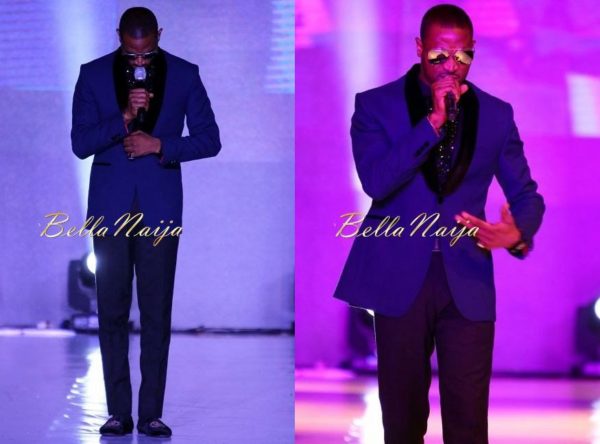 Bangalee in the building. The Koko Master who is set to begin production on Season 2 of his reality TV show – Koko Mansion, was dapper in a navy single button suit with black velvet lapels.

Toni Tones is one to watch out for in the music scene.

The celebrity photographer turned pop star hit the stage in a sexy outfit. She chose a black corset number with side fringe, a gold necklace, a white blazer and black pumps.

But it is Toni’s hair that is adding the extra va va voom. She is giving all the Diana Ross ladies out there, a run for their monies. 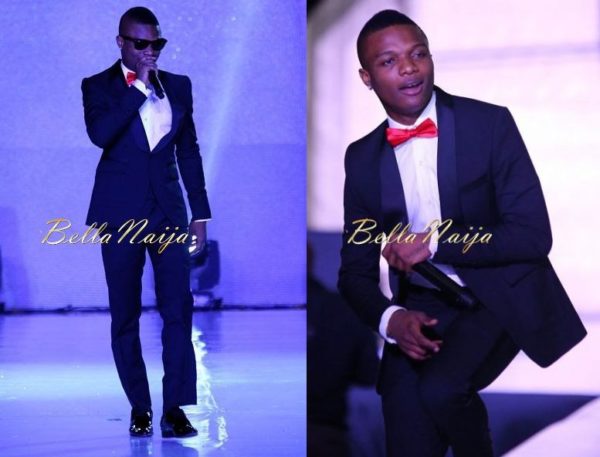 Wizkid skipped the red carpet but made a stylish impression on stage.

Lola Rae brought sexy back. She wore a sequined bra and fringe pants with a white blazer.

Here we were thinking Toni Tones had the biggest hair, Lola Rae wins hands down.

2Baba! The music superstar was hip and cool on stage on Saturday night.

2Face who is expecting another bundle of joy with Annie Idibia anytime soon, wore a blue jacket, a graphic T shirt, red leather pants, a black snapback and black shoes.

Ohimai Atafo had a military inspired wedding moment on the runway. After showcasing his bridal pieces, Uti Nwachukwu walked down in an army inspired regalia.

He was the groom.

And here comes the bride…all dressed in MAI.

Nollywood starlet Osas Ighodaro was a masked beauty in an off shoulder white dress with intricately placed appliques and a ball skirt.

And they lived happily ever after….

Temi DollFace is Santa’s Little Helper! Check Out Her Special Christmas Photo Shoot For Her Fans

Toke Makinwa: “He’ll Brainwash You…Wake Up from Your Slumber”! Watch “Don’t be an Accidental Side Chick”