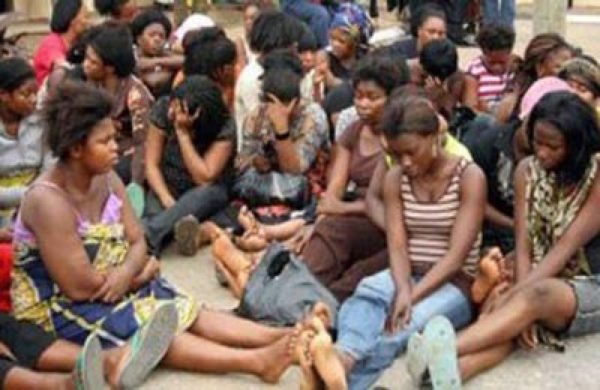 One of the best works of fiction I read in 2013 was Chika Unigwe‘s On Black Sisters’ Street. Even though a lot of people don’t believe that writing about situations does anything to change things for the better, I strongly disagree because a crucial aspect of change is creating awareness to the situation. Reading On Black Sisters’ Street provided a world of insight into the world of human trafficking and prostitution.

We cannot afford to bury our head in the sand and pretend like it doesn’t exist in the society we live in. So an investigative reporter, Tobore Ovuorie going undercover in order to get to the root of this horrific situation going on in Nigeria, is greatly applauded. In collaboration with Premium Times and Zam Chronicles, they have presented a well written investigative report, titled “Inside Nigeria’s Ruthless Human Trafficking Mafia” {Please click here to read the full report}

Read some excerpts below.
***
Risk analysis and preparation
It had all started in Abuja, with me deciding to expose the human traffic syndicates that caused the death, through Aids, of my friend Ifuoke and countless others. As a health journalist, I had interviewed several returnees from sex traffic who had not only been encouraged to have unprotected sex, but who had also been denied health care or even to return home when they fell ill. They were now suffering from Aids, anal gonorrhea, bowel ruptures and incontinence. In the case of some of them, who hailed from conservative religious backgrounds, doctors in their home towns had denied them any treatment because they had been ‘bad’. I was also aware that powerful politicians and government and army officials, who outwardly professed religious purity, were servicing and protecting the traffickers.I wanted to break through the hypocrisy and official propaganda and show how, every day, criminals in Nigeria are helped by the powerful to enslave my fellow young citizens. My PREMIUM TIMES colleagues had done undercover work before; they had warned me of the risks, but had agreed to support me in my decision to go through with it. With my colleagues, and with the help of ZAM Chronicle, we then started in earnest.

Oghogho
I had advertised my wish to get to know a ‘madam’ whilst walking the streets of Lagos, dressed as a call girl.It worked. I had met Oghogho Irhiogbe, an accomplished, well-groomed graduate in her thirties (though she claimed to be only 26), and a wealthy human trafficker of note. My lucky hunch to tell her that my name was ‘Oghogho’ too had immediately warmed her to me. She told me I looked like her kid sister and from then on treated me like a favourite.

“Don’t worry about crossing borders and getting caught,” she had told me. “Immigration, customs, police, army and even foreign embassies are part of our network. You only run into trouble with them if you fail to be obedient to us.” I already knew this to be true. Two of the trafficked sex workers I had interviewed had tried to find help at Nigerian embassies in Madrid and Moscow, only to realise that the very embassy officials from whom they had sought deportation had immediately informed their pimps. They had eventually made it back to Nigeria only after they had developed visible diseases, such as AIDS-related Kaposi sarcoma.

“Precious had already made enough money to start building her own house in Enugu, halfway between Abuja and Port Harcourt.”

Forza Speciale
It’s a rule of thumb, I understand, that a syndicate subjects girls to classification through a check on their nude bodies and I, too – in the company of some male and female judges, headed by a trafficker called Auntie Precious – had been checked. I had received the highest classification. “This means that you don’t have to walk the streets. You can be an escort for important clients,” Auntie Precious had told me in a soft, congratulatory tone. The ones of ‘lesser’ classification were referred to as Forza Strada, the Road Force.

The party is held at a gorgeous residence along the Aguiyi Ironsi Way in Maitama, Abuja. This is designed to be a festive end to a great day, in which we went to church, hung out at the choicest places in town, shopped and got dressed in a suite at the Abuja power citadel, meeting point of the elite, the Transcorp Hilton.

“The ‘dividend’ is not from prostitution and trafficking alone, but Oghogho won’t tell me what the other source is.”

It is more like an orgy. Male and female strippers entertain guests, drugs abound, alcohol is everywhere in unrestrained flow; there is romping in the open. Also, big bags of money are changing hands. Barely an hour after we arrive, Oghogho receives a big jute bag, which is delivered from another room. As we walk out and she puts the money in the boot of her car, she smiles at me. “Don’t worry; very soon, you’ll get to receive dividend.” This ‘dividend’ is not from prostitution and trafficking alone, but Oghogho won’t tell me what the other source is. “When you come on board fully, you’ll know.”

Horror
A just-arrived traditional ‘doctor’ then puts us through rites that involve checking the horoscope of each girl as well as collecting some of her blood, fingernails, hair and pubic hair. He then picks out four of us as ‘problematic’ and says we will bring ‘bad luck’. Either he is really clairvoyant or he is a professional security operative who has run background checks on us, because he is right about at least three of the four. Two of us have had unfortunate earlier experiences involving deportation back to Nigeria and are possibly known to the authorities in Europe. I am number three.

As we ‘unlucky’ four, are standing aside, Mama C talks with five well-dressed, classy, influential-looking visitors.The issue is a ‘package’ that Mama C has promised them and that she hasn’t been able to deliver. The woman points at me, but Mama C refuses and for unexplained reasons Adesuwa and Omai are selected. We all witness, screaming and trying to hide in corners, as they are grabbed and beheaded with machetes in front of us. The ‘package’ that the visitors have come for turns out to be a collection of body parts. The mafia that holds us is into organ traffic, too.

With all of us trembling and crying, I and the other three ‘unsuitable’ ones are herded into a separate room. Mama C comes later to take me to yet another room for questioning. Angry beyond measure, she whips me all night, telling me to yield information on the ‘forces’ protecting me. “You are going nowhere,” she keeps shouting. “I have invested too much in you!”

Escape
The original plan was for me to go with the transport as far as Cotonou, the capital of our neighbouring country Benin. But I don’t want to stretch it any longer. The border is usually very crowded and I plan to escape as soon as we are there. It works. Just after the Seme border post, in front of a crowded, muddy market, I run. Merging with the crowd, I take my top off – I have another top under it – and cover my head with a scarf. The army officer is following me, looking for me. I dive into a store and lose him.

I travel the twenty kilometres from the border motor park to Cotonou by minibus taxi.Colleague Reece – alerted by a phone call the driver helps make to her to ensure that she will be there to pay him – will wait for me there. Upon arrival, I see a woman I recognise from her Facebook photo. “Reece?”“Tobore!” She cries and holds out her arms to catch me. “I am safe.”

Her account of events is quite bone chilling. We hope that someone, somewhere will read this and help get to the bottom of this problem.

Amongst some concerns raised since her report came out are, Tobore’s safety, as well as getting this information to organizations who can do something about the situation.

See these tweets below:

We need more courageous people like Tobore.  Thank you for shedding light on this terrible acts.

Atoke’s Monday Morning Banter: I Can Never Shop At Primark

Samuel Okopi: 12 Lessons of Life from 3 Birds Found Only in Nigeria