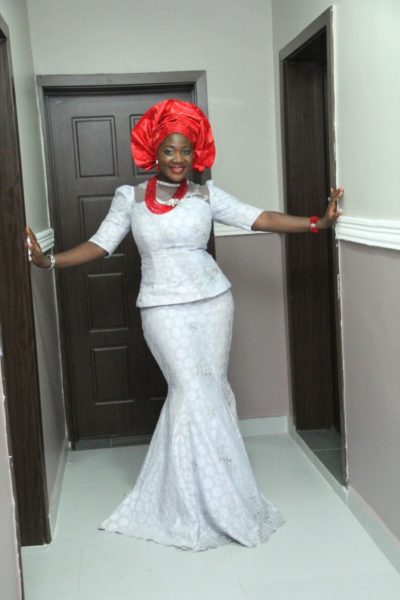 Mercy Johnson is letting you know that if at first you don’t succeed, dust yourself off and try again.

The Nollywood star recently had an interview with Saturday Tribune in which she spoke about her journey into fame, her family, her husband and why she is so much happier now.

Read Excerpts from the interview;
On getting to the top: “Sometimes when I cry in movies, it isn’t the script that makes me cry. When I recall my humble beginning, I give thanks to God. When I remember how we moved into an uncompleted building and had to take cover whenever it rained because of the condition of the house; how my brother did a menial job as a bricklayer to earn a living and those days when we rolled over a stick to cover the windows up till the point when I started acting and raised money to cover the roof… I recall those days we were living with lizards because the floor and the walls of the house were not plastered, or when I had scars as a result of my several falls.”

On starting out as an actress: “After my secondary school education, I failed the University Matriculation Examination (UME) and came back to Lagos to get a degree. While that was on, I watched Genevieve Nnaji in a movie entitled; Sharon Stone. I later approached a friend for assistance to feature in a movie. He said I had a great body and that I would make a good actress. He later took me to the National Theatre, but a role did not come until a year later, when I had my first lead role in a film entitled; The Maid. “

On being a Mrs: “Marriage has taught me lots of things and I’ve learnt a lot since I got married too. I know that if I had gotten married earlier, I wouldn’t have made most of the errors I made. It’s good to be married to somebody who is so organized; he brings you up the right way and reminds you of whom you’re supposed to be.

Marriage has been sweet for me because I have the best husband and daughter in the world. Being a married woman, I have learnt to tolerate things more. It has changed my perspective of life and the way I react to things.

When I’m not at location, I spend quality time with my family. And guess what? My husband has always been there for me and Purity. It’s obvious we are his priority. He’s a loving husband and father. He understands the nature of my job. He’s the best thing that has happened to me. People usually say men are not reliable. In the case of my husband, he’s a blessing. “

On the attraction: “What attracted him to me was his fearless approach. You know sometimes, you meet some guys and they get intimidated about you, but not with him. The first time we were supposed to have a date, he said “Let’s go to my house so you can cook for me” and in my mind, I was like “Seriously, this guy doesn’t know my name.” So, I said “My name is Mercy Johnson” and he said “Yes I know.”

On negative reports:  “A lot of untrue things have been said about me, but I have come to realise that it doesn’t cost people anything to cook up lies about me. The one I remember vividly is the one they said I stole money and also snatched people’s husbands. I lost a deal worth N 50 million from a telecommunication company because of that.”

On Tonto Dikeh dissing her on Twitter for returning to work after 2 months of welcoming Purity: “I’d rather not talk about it.”