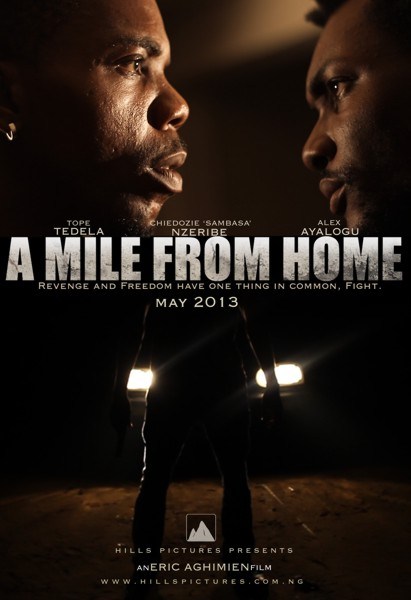 Synopsis
“A Mile From Home” is the story of a man Lala (Tope Tedela) whose decision to join a cult sets him down a path he never wanted to embark upon.

The Story
There is no denying I have a phobia for Nollywood action movies (or almost any Nollywood movie at all). It takes great courage to take out 1500 Naira and drive down to a theater and sit through 2 hours of a Nollywood flick. Sometimes it’s the fear of burning bandwidth on streaming the movie online. So for me, A Mile From Home was a great risk. Even with so much buzz about the film, I was still skeptical(Afterall, Apaye also had a lot of buzz, but look how it turned out).

A Mile From Home (AMFH) opens to a scene of a guy being tortured. We don’t know why, but the beating and sound effects looked legit. Then gun shots were fired and the sounds came out right. Before that point, the movie had my curiosity, but afterwards, it had my attention (Django Unchained pun intended).

The movie is a crime thriller written by Eric Aghimien who is a new comer in Nollywood. With his first work being this impressive, he is someone I will definitely be looking out for in the future.

The movie raised several themes that I thought would become subjects of concern when it was time to have them resolved. There was the love triangle between the central characters and Ivie (Tolu Akinbileje), the naïve friend Lala was trying to protect, the lady who was spying on Lala in the beginning, the interest of a rival gang member in Ivie and the gang war that this resulted in. Like that wasn’t enough, they had to deal with an ex-con from South Africa trying to get some very important package from them at all cost. But surprisingly AMFH managed to resolve them all intelligently.

AMFH however didn’t do a great job with its character development. Many of the characters were half developed. For example, Lala’s backstory wasn’t clear. We know he can’t go home because of his involvement with the gang. We know he has a sister in the same school and we know there is some conflict between him and his father for some reason, definitely his involvement with the gang. But a few lines of dialogue(please no need for flash backs) with his sister will have given us more light on what really ruined his relationship with his father to make Lala come to the conclusion that he doesn’t have a father anymore. That’s too deep to be left hanging.

My biggest issue with the story was the defect of a certain character, to another gang towards the end of the movie. I wouldn’t want to go deeper into this so I don’t spoil it for people who haven’t watched it, but it was rushed, lazy and not properly executed.

The Directing
Visual and special effects, stunt and fight choreography, set design, sound editing, directing and not to forget writing earlier mentioned all by one person. Eric Aghimien. The stunts, effects and fights were believable and the sound design was very impressive. From what I gathered from a source and this interview on Nolly Silver Screen, he was on a very tight budget and they shot only on weekends and it took several months for the shooting of the film to be concluded.

I can’t overstate how impressed I was with this movie, but a lot of the technicalities could have been better. Soundtracks and editing most especially. Great job Mr Eric. You just gave Nollywood its arguably best action movie I have ever seen.

The Acting
This was my least favorite part of the movie. The acting wasn’t always impressive. Sometimes they disappointed but nevertheless, some scenes stood out. The scene with Lala and his sister was one of the well acted scenes. It was touching and emotional.
Tope Tedela’s as the lead gave a good performance, but sometimes was stiff and artificial.

Even though Suku (Cheidozie Nzeribe) was very terrifying and my personal favorite character in the movie, he was a bit stagy many times.

Don Kobo (Alex Ayalogu) was my least favorite. His voice felt like he was trying too hard to sound like Batman and Deba (Eric Nwanso) as the naïve “Ju Boy” was played well.

The Verdict
A Mile From Home is entertaining, thrilling, action packed and definitely sets a standard for Nollywood action movies. I am definitely looking forward to more works from this team. It’s a Popcorn & Soda for the flick.