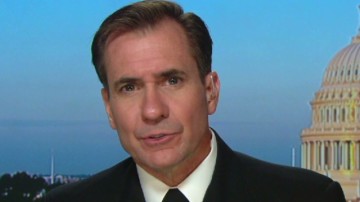 Pentagon spokesman, Rear Admiral John Kirby, has reportedly revealed that the United States does not know where the over 200 abducted Chibok girls are.

He however said that the U.S  is unrelenting in efforts to locate and rescue the girls, Punch reports.

Kirby is said to have stated, “We don’t have any better idea today than we did before about where these girls are, but there’s been no letup of the effort itself.”

He also allegedly revealed that the U.S decreased its surveillance flights in the search for the girls.  However, he noted that overall search efforts are as rigorous as before, due to the presence of more flights from other countries.

Davido! Usher! Nicki Minaj! All the Scoop from the BET Awards 2014 + Full List of Winners