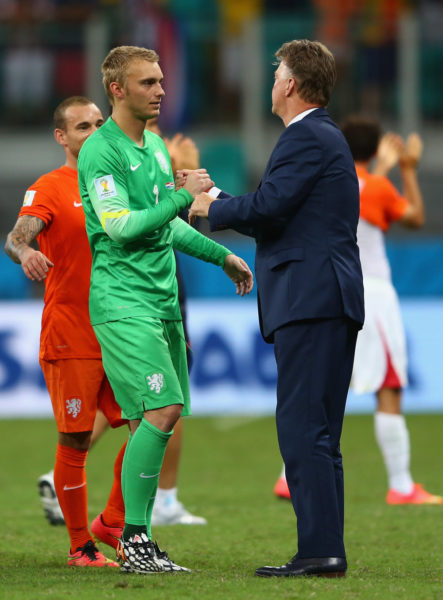 The Netherlands coach, Louis van Gaal, has been praised for his tactically sound decision to replace Jasper Cillessen in the 120th minute of their game in favour of the slightly taller Tim Krul. Krul then went on make two saves which helped the Dutch reach the semi-finals.

For a goalie whose penalty-saving record is not actually that great, keeping out just two of the 20 he has faced in the past five years, it showed the kind of faith Van Gaal had in him. Perhaps his decision was rooted in something Krul has been doing right in training sessions.

Noticeably, the Newcastle United goalie approached each penalty taker and not only stared them down, but preyed on their nerves by yelling at each man that he knew which way they were going to go. Even after one of the penalties went in, Krul continued to hit the message home and tried to make each player aware that he knew their thoughts.

Call it mind games, psychic ability or trying to get the job done, Krul guessed right on each occasion. With even the penalties that went in grazing the goalkeeper’s fingertips (he didn’t take the approach of waiting until the kick was taken before moving to guess) it is highly unlikely that his actions did not at least have an effect on the penalty takers.

Krul took advantage of the old cliché that says, there is comparatively little pressure on the goalkeeper because they are not expected to save penalties, but the takers are very much expected to score them. Even though he came on specifically for the penalties, he took the pressure off himself and transferred it to the Costa Rican players.

Louis van Gaal is, however, not the only coach to make tactically sound decisions in the tournament so far. We had the likes of 64-year-old Jose Pekerman (a former taxi driver), who led the Colombians to a dream tournament at the World Cup – despite seeing their dreams dashed by hosts Brazil in the quarter-finals. Miguel Herrera (Mexico’s coach), who managed to overturn one of the darkest periods in Mexican football in a matter of months and got them to the round of 16. Jorge Luis Pinto (Costa Rica) gave opportunities to the likes of Joel Campbell to unleash their prowess in Brazil and bowed out in the quarter finals having conceded only two goals and without losing a game (in open play). Finally, Stephen Keshi (let’s be patriotic) he tried his best for team Nigeria, though he made some mistakes along the line, the Eagles still made it past the group stage.

Did I leave anyone out?
Photo Credit: Michael Steel | Getty Images