Who is The Bride?! Are Wedding Guests Taking it 'Too Far'?

Every weekend on Instagram, you can be sure you’ll see your friends, followers and foes alike in their hottest gear to attend a wedding. From bridesmaids to wedding guests (yes, even those without an official invite ^_^) everyone is trying to look their best.

It’s now the norm for makeup studios that charge 5k to 30k for makeup & gele to overflow with customers every single Saturday (and smile to the bank on Monday), the studios get so busy that if you’re a guest, you have to set aside a few hours to do your makeup especially if you didn’t set an appointment beforehand.

But … is it getting too much?

Some brides have started confiding in us – “I’m thinking of getting a junior bridal party (only flower girls, little bride) because I don’t want my bridesmaids to outshine me.” “Is this OK? Will people notice?”

For some brides, it’s their show-stopping guests that caused the wahala! A recent bride told us

“I was so shocked at what she wore! I wanted to throw her out!”

On the other hand, some brides want their guests to stun and sparkle, making metallic, gold or sequin aso ebi the dress code. Brides have told us they made custom made dresses for their bridesmaids so they could feel like it was their day too. There are also modern brides who want their girls wearing white, so they can feel their friend’s joy and stand out just like her.

From the guests’ point of view, some people ‘want to sell their market’ – a lot of people meet their husbands/wives at weddings so they want to be left out of the mix. Someone jokingly told BN Weddings, “eh hehn, she has married now, it’s our turn.”

For the grooms, we had a groom confess that he disagreed with his best man’s suggestion to wear the same suit with him on his wedding day but let it go so as to avoid seeming petty. However, when he saw his wedding photos, he realized his should have followed his instincts as his best man outshone him!

So… where do you stand?

Whenever we’ve brought up this topic, a lot of people say it’s the bride’s day and no-one can outshine her, because of her natural glow/happiness that day at marrying the love of her life.

On the other hand, we’ve experienced attending a wedding or two where the uninvited guests who just come for the party whisper to each other, “Who is the bride?”, “Is that her?”, “hmm…” because there are guests dressed in fancier and flashier attire with their ‘hair laid’ and faces ‘beat to the gawds’, while the bride just looks OK (in their opinion).

So what say you? Will you kick out a guest for dressing too flashy at your wedding? Will bodyguards throw out a guest wearing anything close to ivory? Or can no one outshine you (you’re fly like that)?! 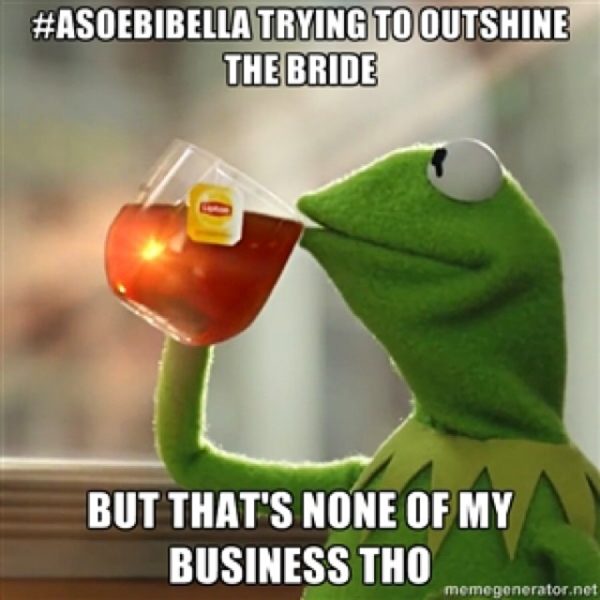 We love weddings as much as you do – get in touch for inquiries, inspiration & more!