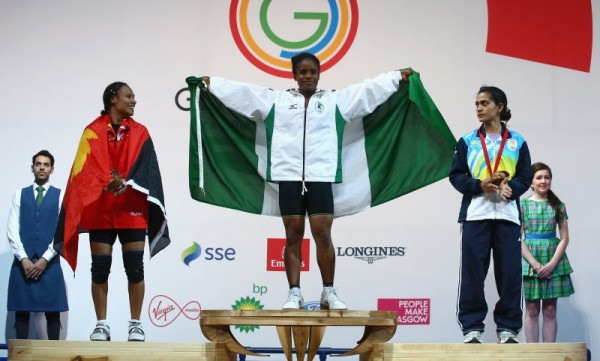 Amalaha failed a drug test on Tuesday after her A sample showed traces of diuretics and masking agents.

The athlete, who won a weightlifting gold in the 53 kg class on July 25, had her B sample also tested in London on Wednesday which confirmed that she took the banned substances.

Amalaha was provisionally suspended by the CGF on July 29, while she waited for the result of her B sample.

Gbenga Elegbeleye, the Director-General of the National Sports Commission (NSC), told newsmen after hearing on Friday that the CGF had stripped Nigeria of the gold medal Amalaha won.

The CGF’s letter to the Nigeria Olympic Committee (NOC) which Elegbeleye read to newsmen states as follows:

“Further to your (Amalaha) appearance today at the federation’s court (CGF) we hereby notify you that the court has decided that you have violated its rules through the use of banned drugs.

“The class of substances contained in her urine sample collected on July 29, 2014 are diuretic and masking agent as well as Hydrochlorothiazide.

“The court decision is that the following sanctions be imposed on you; that you are fully suspended from the 2014 Commonwealth Games.

“That you are disqualified from the 53kg weightlifting event within which you took part at the 2014 Commonwealth Games with all results nullified.

“That the gold medal and price awarded to you should be forfeited and returned.’’

Elegbeleye pointed out that the CGF had informed the NOC that the medals would immediately be withdrawn from Nigeria on the medals table.

The News Agency of Nigeria (NAN), however, reports that the gold medal has yet to be withdrawn from Nigeria on the medals table as at the time this reports.