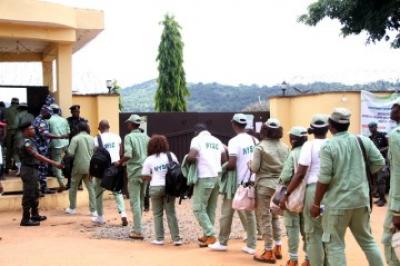 Ado-Ekiti (NAN) – The Ekiti State Government on Friday described as untrue reports that a youth corps member, who slumped at the orientation camp at Ise/Emure Ekiti, had contracted the dreaded Ebola virus.

The state Commissioner for Health, Prof. Olusola Fasuba, said that the corps member (names withheld), who was posted to serve in the state was only suffering from chronic fever.

He advised residents not to mistake common ailments, such as chronic fever, for the dreaded Ebola virus.

Fasuba spoke at an awareness forum in Ado-Ekiti, following the speculations in the state that Ebola virus had hit some towns.

“Although, information reaching my office from the ministry of youth and sports confirmed that a particular male corps member collapsed at the orientation camp.

But, it was unfortunate that people around him ran away taking his sickness for the dreaded Ebola virus.

“Immediately I received the information, I swung into action by ensuring that the sick boy was immediately attended to by a team of health workers.

“They later discovered that he was suffering from chronic fever, the information they passed to me without wasting time.

“But, I did not stop at that, at least to be sure of his correct state of health, his blood samples were taken and sent to Lagos.

“We received the results on Thursday indicating that he tested negative to the Ebola virus.

“The corps member has been taken away from the camp and is currently being kept at our isolated centre located within Oba Adejugbe General Hospital, Ado-Ekiti.

“As I speak, I assure residents that the health of the boy in question is already improving, while he continue to show signs of good health far from Ebola,” he explained.

Fasuba warned rumour mongers to desist from spreading false information that could mislead or scare people, saying that government had taken pro-active measures to prevent the virus from spreading to the state.

He listed such steps to include banning of movement of uncertified dead bodies into the state, constitution of 30 technical committees and creation of three isolation centres in Ado-Ekiti, Okemesi-Ekiti and Ifaki-Ekiti.