The man who killed the 2-year-old daughter of a Nigerian man Reuben Agboola, Amina in November 2013 has been sentenced to life in prison at the Cambridge Crown Court, England.

26 year old Reuben Agboola had Amina with Sarah Racqueman. When Reuben and Sarah split, he hardly saw his daughter and a year later officers told him that little Amina had been killed.

The Independent UK reports that 20-year Dean Harris who was dating Amina’s 29-year-old mother Sarah, killed Amina after becoming frustrated at her soiling herself.

Harris killed Amina Agboola by kicking her so hard she was thrown six feet across the room and ruptured her liver.

The force of the blow was severe that it tore her liver in two. According to paramedics, they found her body lying “like a rag doll”.

In a detailed confession letter, Harris admitted to manslaughter but was convicted of the child’s murder. He will spend a minimum of 17 years in prison. 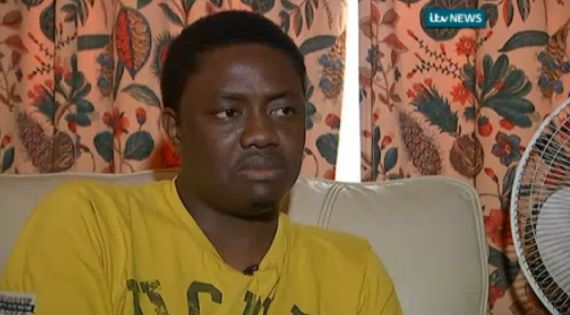 At the sentencing, Reuben Agboola said; “I am pleased with the sentence Dean Harris has received today. However the grief feels like it has no end. I think about Amina constantly. I still cry everyday.

I go through the motions of living but inside I am somewhere else thinking about my daughter all the time. No one understands the pain except those people who are experiencing it.

My heart reaches out to every parent on earth who is suffering the loss of a child.”

Amina’s mum and Harris had been dating for just five months. She was cleared by a Jury in June for causing or allowing the death.  She however got a suspended sentence earlier in the month.

Reuben claims Sarah had been warned by social workers of Harris’ “furious” ways.